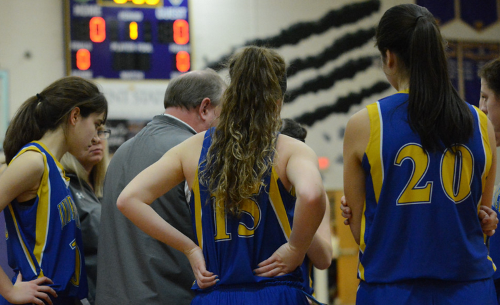 Independence will start the New Year with a ton of momentum after beating host Harvey, 43-27, on Wednesday.

“We’re happy,” said Independence coach Mike Marcinko. “They’re very athletic and have some size and length. It was a test for us but we rose to the challenge.”

Independence led just 21-18 at halftime as the Red Raiders sat back in their zone and limited Independence’s scoring opportunities.

Megan Kuczmarski also was limited in the first half thanks to early foul trouble.

“We really had no post presence so we became a perimeter team for a good eight minutes in the first half,” Marcinko said. “We struggled a bit with their zone and we didn’t shoot it overly well. We did just enough to keep them at arm’s length at halftime.”

Independence extended its lead to 29-24 after the third quarter then dominated the final eight minutes of play. The Blue Devils scored 14 points in the fourth quarter while allowing just one Harvey 3-pointer.

“We didn’t give up a bucket in the last five minutes of the game,” Marcinko said. “They were in single digits the entire second half. Our girls did a tremendous job defensively in getting some steals and breakouts. They played with a lot of confidence.”

It helped having Kuczmarski back on the floor.

“We got Meg back and made some adjustments on offense and defense,” Marcinko said. “We went to a matchup zone, which confused them a lot and got some stops, steals and breakaway layups that got us out in front to stay.”

Kuczmarski finished with just six points but her foul trouble and a mouth injury limited her playing time.

“She didn’t play poorly,” Marcinko said. “She got in foul trouble early and got popped in the mouth and was hurting. I’m not sure if it was her tooth or if she bit her lip but she was in a lot of pain and played through it. I went down to check on it and asked her if she was sure she was OK and she looked up with blood in her teeth and said, ‘Yep, I’m good to go.’ You’ve got to love it when she goes up to the table with blood in her mouth and asked, ‘Who is my matchup again?’ If she’s not out there anchoring the middle we’re in trouble. She played tough.”

“She put us on her back a little bit offensively and took us home,” Marcinko said.

Julia Riley contributed with nine points but was a major force in directing the Blue Devils on both ends of the floor.

“She handled the ball a lot and played a lot of point for us and two-guard,” Marcinko said. “She scored for us, and got some deflections and steals. She was getting us into coverages and doing all the floor general stuff.”

Mia Coudriet added six points in the win but it was her defensive presence, especially in the second half, that impressed her coach.

“One of my assistants told me she had six steals in the fourth quarter,” Marcinko said. “She got us some boards too. She’s quick and has some length and she sees the game well. It was nice to see her down the stretch help to determine the outcome of a game.”

The 7-4 Blue Devils travel to Cuyahoga Heights on Wednesday.