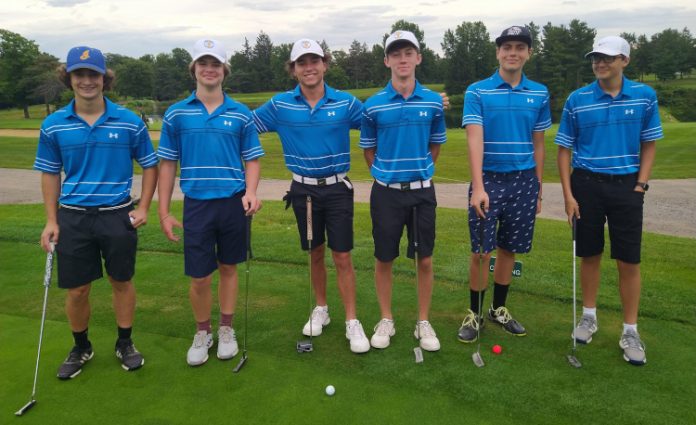 The Blue Devils shot 328, 22 strokes ahead of second-place Wickliffe (35). Lutheran West finished third with a 394.

“We actually didn’t even play our best golf,” said Independence coach Ryan MacRaild. “From top to bottom, we were kind of all over the place. Pine Hills is a hard course. We know we can shoot better golf but today we were just good enough, but if we don’t improve by the end of the season we’re going to be in trouble. These guys will take this opportunity to enjoy the moment but they also know that we can do better and we will improve and grow from that.”

“It’s always exciting to start off the season with a tournament win,” Pillar said. “We always take it one practice at a time and we will definitely use this to build momentum for the rest of the season.”

It took Pillar a few holes to find his groove but he managed to overcome that slow start to outshoot the field.

“Overall, I was happy with my score,” he said. “I wish I could have started off better but I’m satisfied with how I finished. The key to my success was definitely my mentality and experience. I started with three bogeys but with my preparation from the summer season, I knew I could come back and finish strong.”

Liam Jenks, who started the season on the JV squad, earned the No. 5 spot on Independence’s roster based on his performance in the season-opener on Saturday.

He responded by placing third with an 81.

“We gave Liam a shot with the varsity group today and he rose to the occasion,” MacRaild said. “He had a rough start on hole one but he picked himself up and had a lot of pars and kept himself in it. He was competitive, even as the No. 5 he was still able to compete with the other guys not even knowing where they were at. That was good focus from him and he has great potential for the rest of the season.”

Charlie DeCapua and Sam Coddington also placed among the top 10. DeCapua was fifth with an 84 and Coddington finished seventh with an 87. Joey Spacagna placed 12th with a 94 and Nick Lucas finished 19th with a 111.

The Blue Devils will split their squad on Tuesday with half the team headed to the Keystone Invitational and the other half will play at the Kenston Invitational.