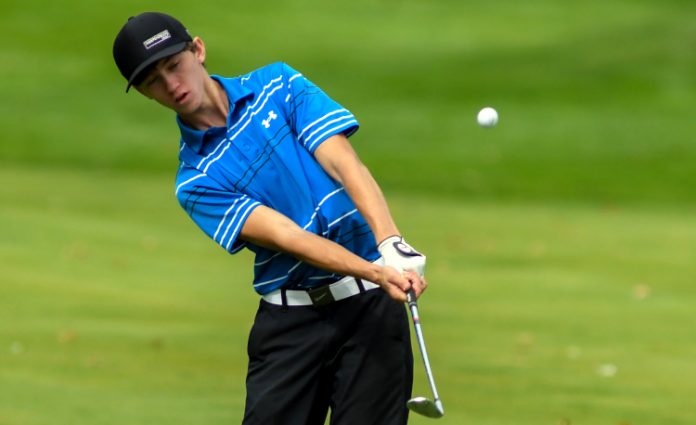 The Blue Devils, who also won the preseason tournament and finished undefeated in match play, carded a 328 to beat second-place Beachwood by 32 strokes.

“It was great to win the conference,” said Independence coach Ryan MacRaild, who was named Coach of the Year. “This is a very talented group of golfers. They shoot well, pick each other up, and challenge each other in training. We are just very fortunate to have four guys that can score in the 40/80 or lower.”

“Mark is as steady as they come,” MacRaild said. “He wasn’t feeling great at the CVCs but still came through with our low score. He is a true technician of the game and really is the most reliable golfer on the squad. He has a bright future in the game.”

Liam Jenks and Sam Coddington finished third and fourth with an 80 and an 84, respectively. Charlie DeCapua placed eighth with a score of 88 and Joey Spacagna was 13th with a 95.

“It’s crazy to think that we really could have shot 15 strokes better today but we really could have,” MacRaild said. “My hope is over the next few days and weeks, we sharpen it up and get everyone shooting closer to their averages. It’s a great group of golfers that have a very good chance to win some hardware in the postseason if they put it all together.”

August 15, 2018
Kirtland finished in third place and Independence right behind the Hornets in fourth at the 2018 Badger Invitational at Pleasant Hills Golf Course on Tuesday. The Hornets shot a 350 while the Blue Devils finished with 362 strokes.