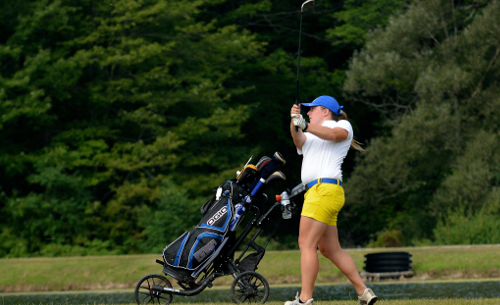 The Blue Devils used their depth to win the team title over second place Hawken, 382-409. Perry was third with 413 strokes.

“They were very excited,” Independence coach Karl Schuld said of his golfers. “Golf is a game where it’s a little different than some of the other sports where you can jump up and down and run around. You don’t want to do that but they were very excited.”

“Bryleigh Wise shot 100 for the first time. She continues to get better,” Schuld said. “Maddie Harper also shot a career low. She chipped in from about 30 yards. What a day for her.”

Trombetta has been the model of consistency for the Blue Devils.

“Sophia had one hole where she had a triple bogie and she never really got back into it,” Schuld said. “All day long they matched shot for shot but Isabella was just a little sharper today. I talked to Sophia afterwards and I think we learned some things she needs to approach a little differently. She’ll be back.”

Trombetta and Blum couldn’t have been happier for the teammates after winning the team championship.

“Sophia, that made her day,” Schuld said. “She was so excited to see how happy the other golfers were. Sophia gets to win stuff so for her to share that moment with the other kids as a team that meant a lot to her and to Lyndsay. I think this almost meant as much to them as anything. It was just neat to see that and to see the camaraderie that has developed between the sixth of them.”

Last fall, in its first year of existence, the Independence team snuck up on some teams to finish third in the league. This year the Blue Devils are even better and the coaches in the league have taken notice.

“It’s just kind of nice because these guys have been around longer than I have,” Schuld said. “To hear the compliments to our kids, you know, Hawken was state champs like three years ago and Debby (Horowitz) said, ‘Your girls are looking good today,’ and I said, ‘Yeah, I know, they’re dressed well.’ And she goes, ‘No, I’m talking about how they’re playing.’”

Schuld is cautiously optimistic about his team’s chances to win it all.

“I think the thing that makes us a little different than any other teams in the league at this point, and we’ll see how it turns out because it’s a long season and things change and there are some pretty good golfers in our league, but just the talent that we go 1-6,” he said. “We’re pretty consistent and they’re getting better each match. Their scores are dropping.”

Independence travels to the Padua Invitational on Wednesday then will be back at Legend Lakes on Monday for the Mentor tournament.