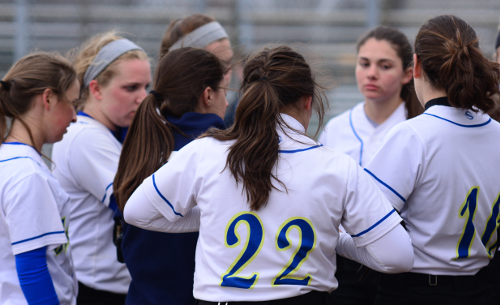 Victoria Sirna pitched a no-hitter and led to Independence’s only run in a 1-0 win over Aurora in a Chagrin Valley Conference Chagrin Division showdown on Wednesday.

Sirna walked one and struck out three to pick to help the Blue Devils improve to 10-3 overall and 5-1 in league play.

“She had five days off and when you can rest it makes a big difference,” said Independence coach Garry Moore. “She hit her locations today.”

With Sirna firing on all cylinders, the Blue Devils’ defense only had to make the routine plays. Sirna forced Aurora’s hitters into 15 ground balls.

Freshman second baseman Sophia Trombetta alone accounted for nine outs. She had eight assists and one put out.

“We played good defense,” Moore said. “The defense made all the plays. They were all ground balls and they made them. That’s what you have to do to win ball games.”

Independence scored the only run of the game in the fourth when Sirna singled and moved to second on Halle Dorko’s base hit. Sophia Piteo came in to run for Sirna and scored on Kim Rega’s single.

“Vic and Halle both have been struggling a little bit so it’s good to see them get hits,” Moore said. When you’re going against Aurora, they brought in Nicole Doyle (a Southern Illinois signee) in the sixth, they’re pitching is really good and she just shut us down.”