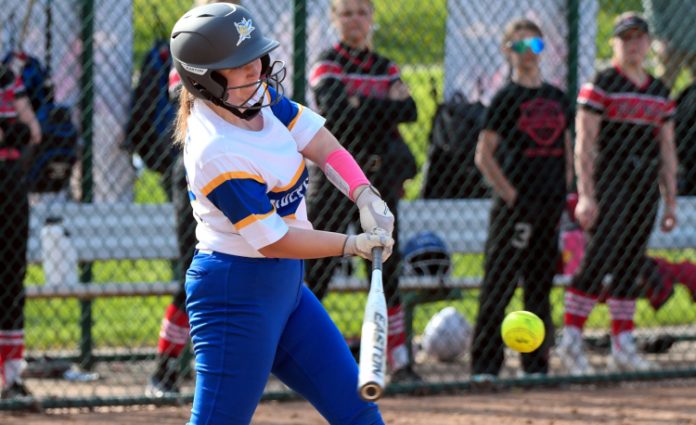 Independence freshman Macey McGhee hit a walk-off single in the bottom of the eighth inning to seal the Blue Devils’ 10-9 nonconference win over visiting Mapleton on Thursday.

The Blue Devils trailed 6-0 before rallying to force extra innings.

“It was very exciting for me to execute for my team,” McGhee said. “(Coach Mallory Kobak) has prepared me for that specific moment for years. It was very rewarding for me to deliver in a playoff-like atmosphere.”

With the game tied at 7-7 in the bottom of the seventh, the Blue Devils loaded the bases but couldn’t get the clutch hit to end the game in regulation.

“We couldn’t get it done,” Kobak said. “The eighth inning came and we started stringing hits together, we were patient, and we were making sure we were going after our pitch. We were able to get it done against a good Mapleton team. We needed that for sure going into the playoffs.”

Haines a two-run shot in the second inning and the Mounties added a run on three hits in the third to take an early 6-0 lead.

“Their first batter hit two home runs,” Kobak said. “She had a great swing and hit everything you threw at her, so we walked her the rest of the way.”

Despite the early deficit, the Blue Devils never felt out of the game.

They began their comeback with two runs in the bottom of the third.

Natalie George hit a single and Ashleigh Porter hit an RBI double and scored on Anna Weber’s single to cut Mapleton’s lead to 6-2.

After Haines doubled and scored in the fourth, the Blue Devils tacked on five more runs.

Rieger tied the game on a Porter groundout.

“We had a conversation that really focused on just being intense and passionate and having the mentality that you’re going to give everything you have,” Kobak said about her team’s ability to rally back. “I told them that in a hype game, that’s what was missing or at least what I felt was missing. They took that and ran with it and we came back strong.”

A one-out triple, a fielder’s choice, and a single gave the Mounties a 9-7 lead in the top of the eighth.

Once again, the Blue Devils responded.

After the Mounties turned a double play, Porter and Anna Weber both singled to load the bases for McGhee.

“For me, it wasn’t nerve-racking,” McGhee said. “I was just excited for another at-bat. I progressed through my normal routine and my teammates had really great at-bats leading up to me, which gave me confidence. I knew a base hit would (win) the game and that was my motivation.”

McGhee hit a 2-0 pitch into left field for the win.

“That was nice to see,” Kobak said of her freshman delivering the game-winning hit. “She was actually 0-for-3 in her first two at-bats and then came up strong had two solid base hits. It was awesome to have a clutch hit like that but it was a team effort for sure. The other girls that got on base before her had solid hits and we strung them together.”

Natalie George led the Blue Devils with three hits, including a double. Porter, Weber, McGhee, Biondi, and Niro each had two hits in the win.

Porter struck out six in the circle.

The Blue Devils, who improved to 9-4 overall, host Trinity on Monday. With a Senior Night win, the Blue Devils would lock up a second straight shared Chagrin Valley Conference Metro Division championship.