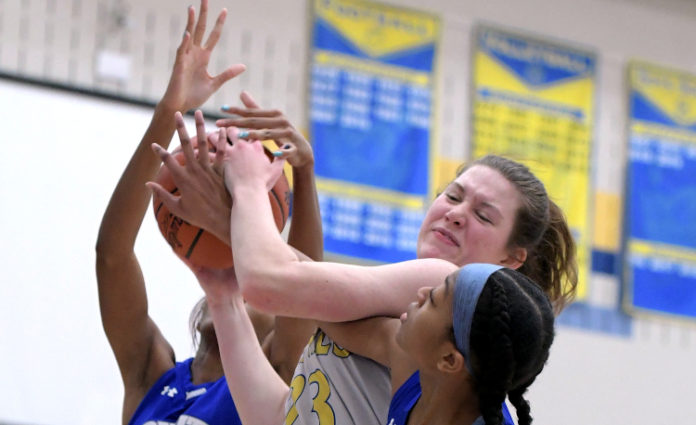 Moments later, Madison Stepanik, a key piece of that volleyball squad, reeled off a game-high 22 points to lead the Blue Devils to a 59-40 win over the Spartans.

“It was a great night to be a Blue Devil,” Stepanik said. “I am beyond proud of what we accomplished this season as a team, as well as individually. I cannot express how blessed I have been to be a part of such special programs.”

Stepanik scored six points in the first quarter as the Blue Devils racked up a 16-9 lead. She dropped in seven more points in the second quarter to help Independence push its lead to 32-20 at halftime.

“My teammates did a great job of getting the ball inside the paint for me to score,” she said. “Running the floor also got me a few open looks.”

The Blue Devils, who improved to 11-5 overall and 6-3 in the Chagrin Valley Conference Metro Division, outscored the Spartans in the second half, 27-20, to seal a bounce-back win following a loss to league-leader Trinity on Monday.

Kara DeSmith contributed to the win with 11 points, Natalie George added eight, Alex Adams and Anna Weber both pitched in with four and four other Blue Devils found their way into the scorebook.

“It was our third game in five days,” said Independence coach Mike Marcinko. “We were a bit tired, mentally and physically. Mads, Kara and Natalie stood out but it took all of us. Everyone that played today scored and contributed, which was great to see.”

Independence closes out league play on Saturday at Lutheran West and a week later will close out the regular season at home against Fairview.

The Blue Devils drew a bye in the first round of the playoffs and will host the winner of No. 8 Chippewa and No. 19 Brookside on Feb. 20.

Independence will need all hands on deck to make a run in the postseason.

“It’s been important for us all to find a way to contribute, offensively and defensively,” Stepanik said. “With postseason games ahead, we could be faced with some tough competition, but nevertheless, we’ll use what works.”

Trojans dominant in win at Independence