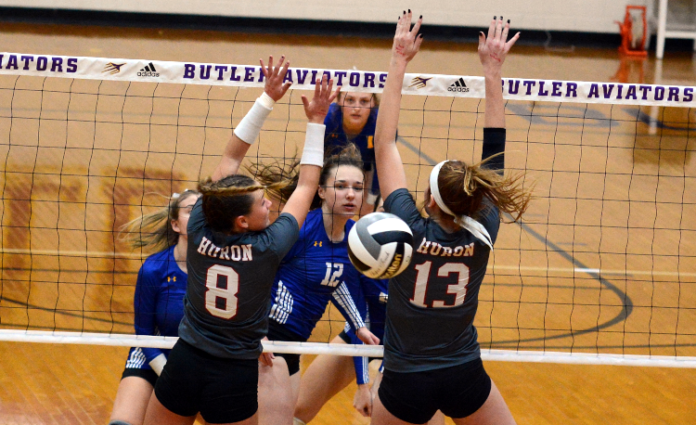 “Our girls played hard; we battled,” Independence coach Tony Messina said. “They played a little harder than us and a little bigger than us in the tie-breaker.”

With its appearance in the Final Four, Independence became just the 20th school in OHSAA history to play in four consecutive state tournaments. The Blue Devils first reached the Final Four in 2017 and finished second in both 2018 and 2019.

Independence rallied from a four-point deficit in the first set to win 26-24 but the Tigers responded with a 25-21 win in the second set.

Huron jumped out to a five-point lead in the third set but the Blue Devils rallied again and pulled out another 26-24 victory to take a 2-1 lead in the match.

The Tigers led by as many as nine points in the fourth set before finishing off the Blue Devils, 25-20, forcing a fifth set.

“They don’t quit,” Messina said of the Blue Devils and their rallies throughout the match. “They play hard every point and play hard every set. The other side was just a little bigger than us down the stretch but we played hard. I’m very proud of our girls. They had a great season. At the end of the day, in the tie-breaker, we just couldn’t get a ball down.”

As a team, the Blue Devils recorded 70 kills, just one off the state tournament five-set match record of 71 set by Albany Alexander in the 2007 state semifinals. Unfortunately for the Blue Devils, Huron’s size advantage played a key role at the net.

The Tigers finished with 17 blocks.

Senior Grace Smotek led the attack with a match-high 26 kills. She also added 24 digs and closed out her remarkable career with four straight appearances in the state tournament. In seven matches at state, Smotek recorded 93 kills and 97 digs. She also contributed with four service aces on Sunday, which was one off the Division III state tournament record for a five-set match.

“Grace played her heart out,” Messina said. “It’s her last match as a high school player and I couldn’t ask for anything more. All of them played hard.”

Callie Prokopius contributed with 16 kills and Sammy Barther added 12 for the Blue Devils. McNamara finished the match with 20 digs.

The Blue Devils closed out the year with a 25-4 record.

Despite graduating Smotek and Madison Stepanik, the Blue Devils will return the bulk of their roster next season and Hanna Wilson also is expected to return to the team after missing the 2020 season with a knee injury.

The Blue Devils will have the potential to make a fifth straight Final Four appearance but it won’t come easily.

“They’ll come in on Aug. 1 and they’ll know what the goal is that we’re going to work hard,” Messina said. “As I told them, every year, every group is a new group and we’ll start again next year. We’ll lose two seniors like we lost a couple of key seniors last year and the year before, but we’ll just start again.”