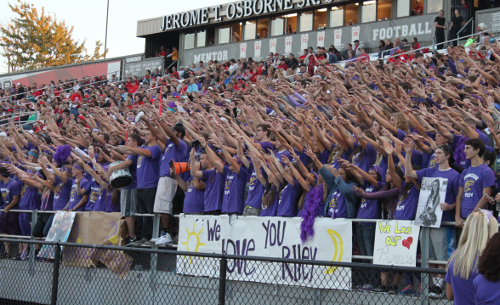 There's not much that needed to be said about Mentor s dominating 48-0 shutout over visiting Brush on Friday night.

Well, except one thing that junior wide receiver Jason Blizzard made very clear after the game.

"This win is for Riley,"  Blizzard said.

Riley Pearson wasn't at Jerome T. Osborne Sr. Stadium, but the 17-year old senior made as much impact on Friday's win over the Arcs as any Cardinals player or coach.

Pearson, a former football trainer at Mentor, is battling cancer. She s been in and out of treatments and surgeries over the last four years. Pearson began her senior year at Mentor this fall, but her condition took a quick turn for the worse and is now at home under hospice care.

Pearson's classmates made purple T-shirts honoring her with Princess Riley and a crown on the front. The shirts sold out – 500 in an hour. Proceeds from the shirt sales will be used to print copies of a book Pearson authored about her time in the hospital and her fight against the disease.

Among the hundreds wearing the purple Princess Riley T-shirt was Mentor coach Steve Trivisonno, who came out at after halftime with a 42-0 lead and a wardrobe change to honor Pearson.

"It's tough. You look at a young lady who has more courage, more heart and more desire than anyone out here on this field tonight. Your heart breaks for the family,"  Trivisonno said. "She is a great girl and we wanted to do our part."

The Cardinals wore a purple stripe on their helmet and had their wristbands decked in purple Pearson's favorite color as well.

Mentor (5-0) also did its part to honor Pearson with a Homecoming thrashing of Brush. The Cardinals scored 28 points in the first half and racked up 42 in the first 24 minutes before the OHSAA s new running clock rule in the second half kept the score down.

Alex Mathews had three rushing TDs, Blizzard ran for a score and caught a touchdown pass from Jake Floriea, and Malik Porter hauled in a TD from Floriea in an overwhelming first half for Mentor.

"It was a tough week with all that was going on, but we focused on our goal which was to win this for Riley and we got it done,"  Blizzard said.

Mathews said the week was difficult with the team thinking about Pearson, and star defensive lineman Nico Lautanen's father who was hospitalized as well as dealing the Homecoming festivities.

However, a quick start and overall team focus was key to not having a misstep in an undefeated start to the 2014 season.

"We had Riley's back, we had Nico's back and we didn't let the distraction of Homecoming get to us,"  Mathews said. "We were thinking about Riley and Nico, and we also had a job to do for everybody tonight and we did it."

Manning Trubisky threw a touchdown pass to Jarrell Jackson in the second half to complete the scoring for the Cardinals.