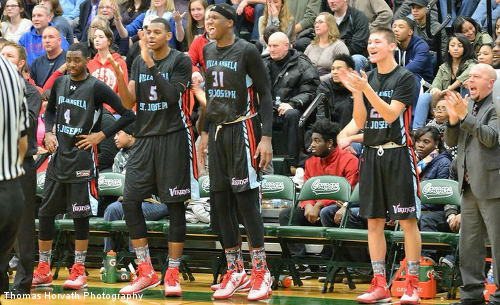 However, Dec. 23 was a special day thanks to Special K.

All-time St. Joseph great Clark Kellogg, who took a picture next to his No. 32 – retired and emblazoned on the floor at VASJ, spoke to the Vikings in the pregame chapel service and had a VIP seat as his alma mater rolled past the Spartans, 90-49.

With the win, the Vikings improved to 6-0 and now have more than a week off before playing national power Arlington Country Day (FL) in Wheeling, WV, on Jan. 2.

Two days before Christmas, there was definitely a family feel at Viking Village with former players such as Duane Gibson, Demonte Flannigan, CJ Germany and Ryan Hooper on hand. But, nobody would deny the largest impact was made by the return of Kellogg and by the message he spread.

“He was very inspirational, heartfelt, spiritual. There’s nothing that I could conjure that was as powerful as the message Clark delivered. Forget about basketball, but to hear what he had to say two days before Christmas was really special,” VASJ coach Babe Kwasniak said.

“Part of thing we talked about was Clark lost his last game. He scored 51 points and had 24 rebounds and there was nothing he could do about losing that last game of his career. Our seniors want to do something about it.”

Through six games – the last five coming in Ohio after a win over nationally ranked Archbishop Carroll in Kentucky – the VASJ seniors and the rest of the Vikings are taking no prisoners.

The win over Richmond Heights was the fifth consecutive game VASJ has scored 88 or more points. The Vikings are on an all-time record pace for points in a season.

VASJ led by nine at the end of one quarter thanks to three 3s by guard Simon Texidor, and extended that out to 44-24 at halftime. The third quarter started with back-to-back alley oop dunks on passes from Mo Johnson to star forward Carlton Bragg, who had an array of slams and finished with 24 points.

“We are really hard to guard. It’s not because we are just talented, but the way we share the ball,” Kwasniak said. “We are doing it kind of effortlessly, and I am still not sure we have played a great offensive game yet. Especially at home where we are due for explosion.”

Dererk Pardon added 12 points, Texidor scored all 11 of his points in the first quarter, Jeff Grudzinski came off the bench to score 9, and Brian Parker and Jacob Stauffer each had eight for the Vikings.

After a few extra days off for Christmas, VASJ will get ready for a trip to Wheeling to take on one of the toughest teams on the schedule.

“Our practices are so intense that these couple days off are good to recharge the battery and I am not worried about losing momentum,” Kwasniak said. “I think our AD (Nate Zavorek) did a great job with the schedule and the way it worked out.

“It was a really good crowd right before Christmas and of course it was great to play with Clark here tonight.”