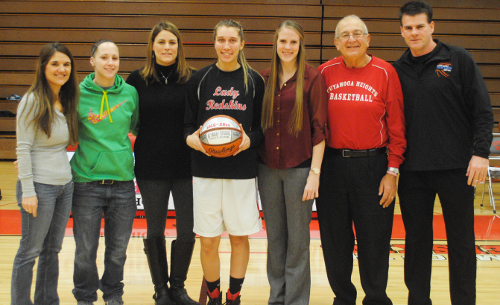 After leading Cuyahoga Heights to the Division IV regional championship game last season Jenna Stegmaier cemented her position as one of the Redskins’ all-time great players.

Now, after breaking the school’s all-time scoring mark in a game against Berkshire on Jan. 3, 2015, Stegmaier is the standard by which all future players will be measured.

“It's a huge honor,” Stegmaier said. “It’s something that not many people can say they have achieved during their life.”

Stegmaier was recognized for her accomplishment on Saturday during halftime of the Redskins’ 43-18 win over Wickliffe. Of course she scored a game-high 16 points in that contest.

The four-year starter currently has 1,375 points with seven regular season games left to play. She also is the school’s career leader in 3-point shots made (105) and assists (314).

Niki Csak was the previous record holder with 1,289 points from 1998-2001. Heidi Mervar now is third all-time with 1,281 points, Kristen Stih is fourth with 1,121 points and Lisa Davis is fifth all-time with 1,041 points in her career at Cuyahoga Heights.