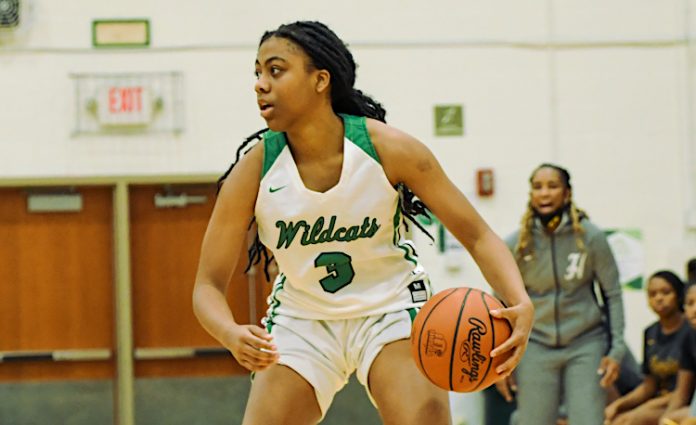 Uriah Jennings scored a career-high 22 points in leading Mayfield to a 52-28 win over visiting Lake Catholic on Monday.

“She made a couple of shots early and she was getting to the rim,” said Mayfield coach Cullen Harris. “She’s a talented kid who is explosive and athletic and it’s good to see her get on the right track. She’s going to lead us to a lot of victories.”

Jennings opened the season with a two-point performance in a win over Shaker Heights and on Saturday, she dropped in 13 points in Mayfield’s win over Cleveland Heights.

She took her game to another level against the Cougars.

“My coaching staff and teammates put me in a good position that would allow me to be aggressive,” Jennings said. “I just tried to come in the game tonight with a confident mindset and doing everything I can to help my teammates.”

Jennings and her teammates have had to do a lot of learning this season under Harris, who is in his first year at Mayfield after several seasons at Chardon.

“Having a new coach and learning how to play a whole different way was a big shift, but we work so hard in practice and the coaches do a great job explaining and helping us,” Jennings said. “A lot has been thrown at us and my team has done a great job responding. Coach Harris always says in the locker room, ‘It’s never me, it’s always we and what can we give to our teammates,’ and I think that right there is one of the things that has motivated us. I really appreciate all of the coaches. They have done an amazing job to put us in good positions to win. Lastly, if we continue to believe in our coaching staff and in each other, I believe we have everything we need to sustain this success.”

Mayfield jumped on Lake Catholic early as the Wildcats built a 19-6 lead after the first quarter. The Wildcats pushed that lead to 26-15 at the break.

Alex Duncan and Hannah Peterson both contributed to the win with eight points.

“We were trying to be balanced,” Harris said. “Overall, we played well on defense and we let our defense turn into offense. We were patient on offense and made a couple of jumpers early to spread them out and make them come out to guard us. We were able to finish well, so we did everything we wanted to do and we played within ourselves. It was a nice team and win that’s what matters.”

Mayfield found itself in foul trouble in the second quarter, which limited the Wildcats to just seven points in the quarter.

They opened the third quarter at full strength and outscored the Cougars, 17-9.

“We were in foul trouble so we were subbing a little bit there in the second quarter and we were a little flat,” Harris said. “When we put our starters back in and we were able to blow it back open. It was just a matter of managing some minutes and some foul issues, but schematically, nothing changed. We were able to make a couple more shots and finish more possessions. I was proud over our effort all night.”

Olivia Williams and Nav Buttar both contributed to the win with five points and Sincere Lucas added four.