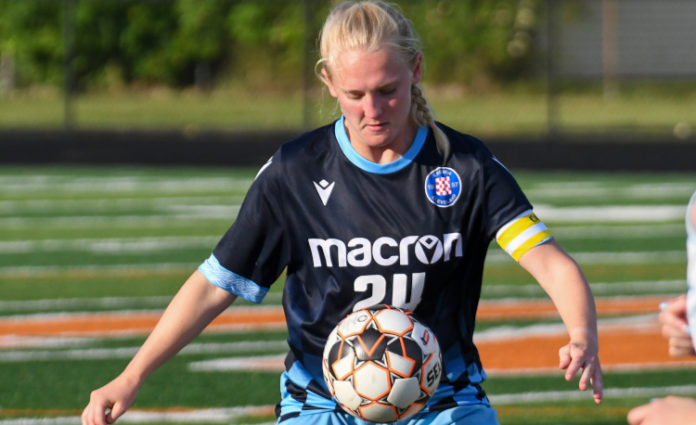 The win was the first for the Juniors in their first season of Women’s Premier Soccer League play.

“It was so awesome,” said Juniors coach Drago Dumbovic. “I’m so pleased and impressed with the players and their effort. Every game, they play it like a championship game. I couldn’t be more proud of them and finally, their hard work created some of the bounces going our way for a change.”

Croatia was forced to play from behind as Motor City scored a goal early in the first half.

“The kid just unloaded from outside of the box and the wind just helped the shot go in,” Dumbovic said. “It was a beautiful goal. I don’t think (keeper) Megan (Biddell) could have done anything. It was just a beautifully struck ball.”

Kiesling tied it in the 24th minute when she tapped in her own rebound.

“Natalie Maver played a ball in the box and I turned and shot it,” Kiesling said. “It rebounded off the goalie and I just finished off the rebound.”

The goal was the first for Kiesling since before her freshman season at the University of Wisconsin-Milwaukee.

She tore her ACL in the fourth game of her rookie year at Milwaukee and went scoreless during her abbreviated sophomore season this spring.

“Tonight was the first time I’ve scored a goal in a real game since I tore my ACL, so it actually has come full circle,” said Kiesling, who set the career record for goals scored at North Canton Hoover High School. “ACL injuries, we say they’re 6-9 months, but they’re 12-14 or 16-18 sometimes because you don’t run for four months. I think that this was a huge confidence booster, and just playing this summer too, and not having to worry. It’s more of just let’s play, let’s play rather than I need to focus on performing and taking some of that pressure off myself. I think now, going into the fall, I can get back to producing goals for Milwaukee.”

Kiesling’s second goal came off of an Emily Gimmel throw-in at the 58-minute mark.

“She threw it in and I just turned the girl and dribbled into the box,” Kiesling said. “I just hit one.”

The Juniors defense did the rest in keeping Motor City out of the net for the remainder of the game.

“It was beautiful,” Dumbovic said of his defense’s performance. “We talked before the game and the girls agreed to continue playing a 4-5-1 and really handled it well. We made a couple of defensive mistakes but this time it didn’t cost us and it gave us opportunities to go forward much more freely.”

Biddell (Mentor/Lake Erie College) went the distance for the Juniors in the net.

“We really played well,” Dumbovic said. “It was a good game on both sides. We just finally started to get some bounces our way.”

With two games remaining, Kiesling is confident the Juniors are headed in the right direction.

“I think we’ve had a lot more time with each other and can communicate a lot better because of all the soccer we’ve been playing together,” she said. “We’re going into our last two games and hopefully, we can get a couple wins and end the season on a high note.”

October 2, 2022
Khalil McDonald scored a first-half goal and Sam Eisenmann added an insurance goal in the final 40 of Independence's 2-0 win over Brush.