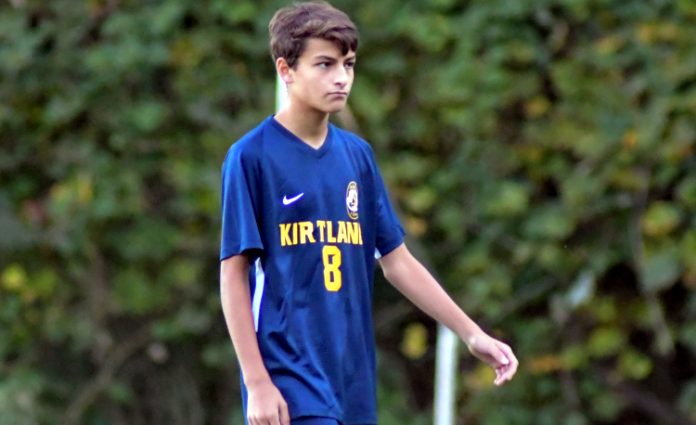 Kirtland knocked off visiting Cuyahoga Heights in a Division III district semifinal at Mentor on Tuesday, 7-1.

With the win, the Hornets improved to 16-2-1 on the year and advanced to their fourth straight district championship game.

“We played well, as a team,” said Kirtland coach John Valentic. “I really liked what we did on and off the ball. They were very defensive, they were very compact, making it a big challenge for us and I don’t care how good your team is, if a team is organized and disciplined, it’s going to be hard to score so we had to work to get those goals.”

Marco Valentic recorded a hat trick and now leads Kirtland with 31 goals this season. Evan Dures added a pair of goals and Jason de Zwaan and Austin Leland each scored once for the Hornets.

Dures and Peter Vukovic both assisted on a pair of goals and Leo Mongelluzzi pitched in with one assist.

Anand Sundarajan was masterful in the midfield, both setting up the offense and preventing Cuyahoga Heights from mounting an attack.

“For me, over the past few games, one of the most important players has been Anand Sundarajan,” Valentic said. “We’ve been using him as a holding midfielder and he just really understands the position and does a does a great job for us there.”

Sundarajan has recorded nine goals and 10 assists this season, but he’s content setting up his teammates.

“Anything to help the team,” he said. “I believe in the coach and just listen and do what he says. I won’t complain about getting goals as long as we are winning.”

Cuyahoga Heights avoided the shutout when Emmanuel Loizos hit pay dirt in the second half for his 30th goal of the season.

Sundararajan held Loizos in check for most of the game.

“It was a physical mismatch, but he made it difficult for him, and then when he got on the ball, he really made things happen for us,” Valentic said. “I was really happy for him and what he did for the team.”

Kirtland will play Hanoverton United in the district championship game on Saturday at Streetsboro High School.

United defeated Berkshire in the other district semifinal, 3-0, and has outscored its postseason opponents, 8-0.

The Golden Eagles have three players who have scored double-figure goals this season, but the Hornets won’t focus on that. Instead, they’ll stick to a tried and true formula.

“We focus on ourselves and try our very best to win,” Sundarajan said. “We don’t focus on the other team and make sure we move the ball and play good soccer.”