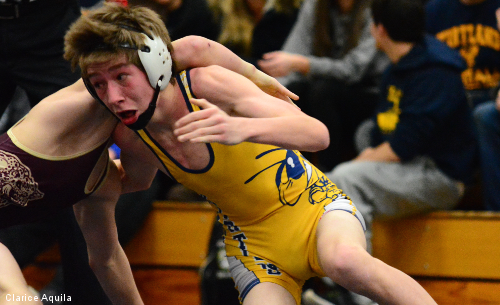 KIRTLAND—No. 2 seed Kirtland defeated Newbury, 51-25, and Liberty, 61-18, in the 2015 OHSAA State Dual Wrestling Tournament Division III, Region 19B quarterfinals on Friday and will wrestle top-seeded Girard in the first round of the regional semifinals at Rootstown next Wednesday.

The Hornets recorded 18 wins, 13 by pin, and lost just four matches in the two duals.

“We came out a bit sluggish in the first match,” said Kirtland coach Scott Francis. “If we don’t go out and wrestle better against Liberty we don’t get the result we had out there. The guys definitely wrestled better matches in the second match of the night.”

Williamson, Mormino, Francis, Brown and Sakenes all pinned both of their opponents on the night.

Jahnke won both of his matches by decision. He defeated Newbury’s Mike West, 7-5, then recorded a dramatic 10-9 win over Liberty’s James Zimbardi in one of the dual’s swing matches.

Zimbardi jumped out to an 8-1 lead before Jahnke slowly worked his way back into the match. A Jahnke escape and takedown cut Zimbardi’s lead to 8-4 then the Liberty wrestler went on the defensive and was called for stalling three times.

Jahnke received one point on each of the first two stalling calls and two points on the third to tie the match at 8-8 with 21 seconds left in the third period. After the third stalling call Jahnke chose to resume wrestling in the bottom position and his reversal gave him a 10-8 lead.

“If there’s one kid on the team that we can count on just to wrestle a smart match it’s him,” Coach Francis said. “He’s done it a few times this year where he’s taken a kid that really wasn’t being aggressive and worked the situation to his advantage, which he did right there.”

Zimbardi would escape with nine seconds left but Jahnke held on for the win.

“He stuck with it out there,” Francis said. “We’re really happy when one of our guys go out there and Dan showed a lot of guts out there and that’s what won the match.”

Kirtland won 11 of 14 matches against Liberty. Two of the Hornets’ losses were by forfeit and they recorded eight pins in the win.