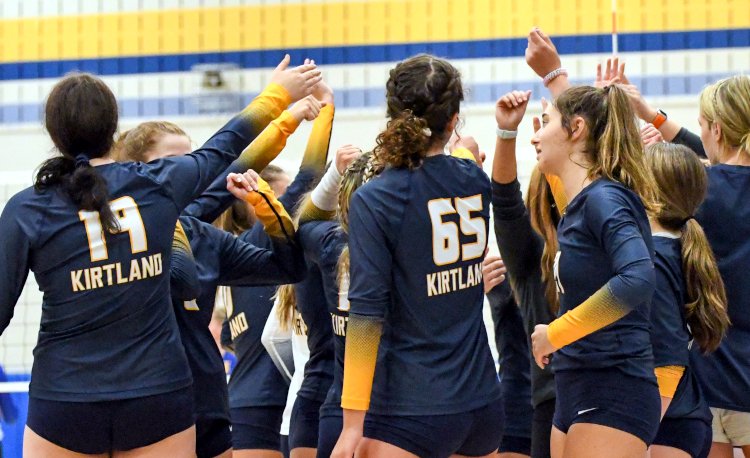 Kirtland added an exclamation point to its biggest week of the season by beating host Kenston on Saturday, 3-2.

“We knew this week was going to be physically challenging but went into it one day at a time,” said Kirtland coach Arlayna Newcomer. “We knew that it was going to be a back and forth game. Kenston is a really talented team and we had to be okay with knowing that at some points things were not going to go our way. We stayed composed and were able to play at a really high level the whole game.”

Kirtland closed out the match with an exciting 15-11 win.

“We played a team that we’ve never seen before and started out down,” Newcomer said. “We adjusted our play really well after we found out what did and didn’t work. Our offense stepped it up and we were earning a lot of points by playing both smart and aggressive.”

“It was probably one of the greatest wins we’ve had all season, especially knowing we were the underdogs against a great team like Kenston,” DeJohn said. “Coming into the game, we knew that Kenston had a huge block and it was proven to be true at the very start of the game. We made adjustments and found holes within their defense. They struggled to get my short tips and I took advantage of that.”

Natalie Glowe contributed to the win with 15 kills. Katie Reynolds posted an eye-popping 48 assists and Ava Golem led the Hornets with 29 digs and six service aces.

With the win, the Hornets improved to 8-1 on the year and are playing with a lot of confidence after several key victories.

“It was extremely satisfying going 5-0 this week,” DeJohn said. “Beating our conference rivals was huge, and winning against top Division II team was a big confidence booster for us. Coach Arlayna has been pushing us hard this year and it has shown major results. At the beginning of the week, we definitely did not have the confidence that it would take to be able to beat challenging teams, but after playing our hardest this week and walking away with well-deserved victories, it has given us more drive and hunger to win.”