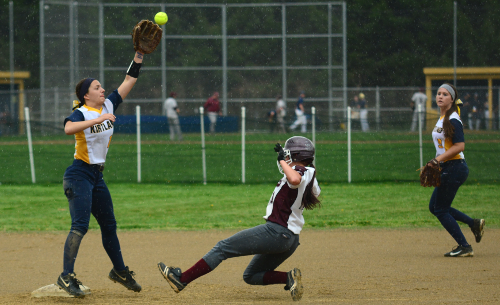 KIRTLAND—Kirtland came up with the big hits when they needed them and Morgan Faber pitched out of two bases loaded jams to preserve the Hornet’s 6-4 win over Fairport Harding on Monday.

With the win, Kirtland improved to 11-3 overall and 6-1 in the Chagrin Valley Conference Valley Division. The Hornets, who have won 11 of their last 12, clinched a share of the Valley Division title and can win it outright with a win over Harvey on Tuesday.

“We were a little concerned about the rebuilding process this year, especially early on, but at some point there, after I think our third game, we really just reached that tipping point,” said Kirtland coach Tony Scibelli. “That continued hard work from our girls paid off. We’re playing pretty well right now.”

Fairport took a 1-0 lead in the top of the first on an outfield error and a single by pitcher Cora Paolino.

The Hornets responded with one run of their own when Hallie Ward doubled to lead off the bottom half of the inning and scored on an error.

The Skippers went up 2-1 in the top of the third but again the Hornets responded. This time Ward hit a one-out homer over the left centerfield fence and Samantha Achauer singled and scored on Sarah Steigerwald’s triple.

Faber helped her own cause when she singled and scored in the fourth to give the Hornets a 4-2 lead.

She then pitched her way out of a bases loaded jam in the fifth.

Two walks and two singles cut Kirtland’s lead to 4-3 and the Skippers had the bases loaded. Faber struck out Paolino and the Hornets recorded back-to-back fly outs to end the threat. Fairport again loaded the bases in the top of the seventh but again Faber and the Hornets escaped the inning.

“That’s a good hitting team there for Fairport,” Scibelli said. “They’re a very good team. Morgan could have folded up shop there in the rain and the adversity of having bases loaded and she stuck through it and earned the win.”

The Hornets manufactured some insurance runs in the sixth when Ward tripled and scored on a single by Achauer, who advanced to third on a throwing error. Achauer later scored on a ground out by Olivia Mancisio.

Ward finished the game 3-for-3 with a double, triple, home run and three runs scored. Achauer was 2-for-3 with two runs scored and an RBI. Steigerwald, Faber and Cameron Garcia also had hits for the Hornets.

“This year we knew that we weren’t going to be a power team,” Scibelli said. “We knew that we were going to need to manufacture runs however that may be, whether it’s slapping, hitting and running or bunting. That’s what really has been the difference maker now. We’re going two bases on every hit and we’re forcing teams to try to stop us. We actually had an overthrow there that scored one of our first runs. That’s the key, working hard on our base running, our hitting and every day somebody is stepping up.”

On Tuesday the Hornets will have the opportunity to win the CVC title outright. All they need is a win over Harvey.

“We don’t like sharing so we’re going to try to be greedy,” Scibelli said. “Harvey is a much improved team. I believe when they played Berkshire they only lost by one run and Fairport only beat them by three I think. They’re an up and down team. You never know what to expect from them. We can’t sleep on anybody.”