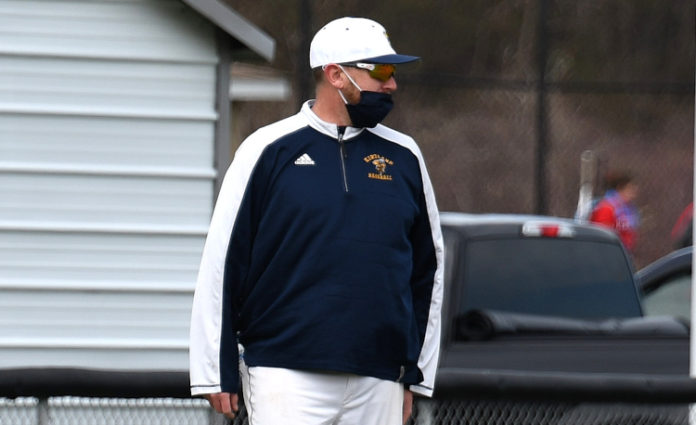 The Hornets dropped the first game, 3-2 in eight innings, then topped the G-Men in the second game, 9-7. That win gave Smrdel 122 in his career. He had been tied for most wins in program history with Glen Biabolil, who recorded 121 wins from 1983-1993.

“It’s a nice accomplishment for sure, but I don’t get all hung up on personal accolades,” Smrdel said. “I got into coaching because I love baseball and to me it’s all about the kids and their accomplishments on the field. I am very fortunate to have coached so many great young men, and am grateful to every one of them for all the hard work they put in.”

“When you look at the program as a whole, I feel it’s a reflection of the consistent hard work that our guys have put in since I started at Kirtland back in 2013,” Smrdel said. “We have hit bumps in the road, of course, but we’ve built upon the successes we’ve had each year. We have established ourselves as a pretty solid program. Ultimately, we want to keep building upon our successes and growing more each year moving forward.”

Saturday’s doubleheader split was a step in the right direction.

“It was a good test,” Smrdel said. “That’s a very good team we played. That first game could have gone either way. They hit the ball at the end and we didn’t.”

Kirtland manufactured two runs in the top of the fifth when Gage Sullivan reached on a dropped third strike, and Reese VanArnhem and Anthony DeMarco hit back-to-back singles.

The G-Men scored single runs in the sixth and seventh to force the extra inning after Kirtland stranded a runner at third base in the seventh.

A walk, a hit batsman and a single gave Garfield the win in the bottom of the eighth.

Andrew Spencer allowed two runs on six hits and struck out 10 in a no-decision. Mason Rus took the loss.

“They got a couple of key hits there in the eighth,” Smrdel said. “Spencer got out of a bases-loaded jam early and he worked out of a few tough situations. He pitched very well but in the eighth, they did enough to win.”

VanArnhem finished game one 2-for-4 at the plate.

Kirtland bounced back with a win in a back-and-forth affair in the second game.

Garfield led 1-0 after one but the Hornets scored a run in both the second and the third innings to take a 2-1 advantage.

Jonathan Withrow drew a leadoff walk in the second. Pierce Boyd singled to move Withrow to second and Mac Boyd hit an RBI single to tie it.

Mason Sullivan drew a two-out walk in the third and scored on Pierce Boyd’s RBI single.

The G-Men scored three in the bottom of the third on a triple, a double, two hit batsmen, and a walk.

Kirtland’s big inning came in the fourth when Mason and Gage Sullivan both hit balls out of the park.

Gage Sullivan opened the inning with a solo shot to left. Mac Boyd then was hit by a pitch and DeMarco reached on an error that scored Boyd. Mason Sullivan then hit a 3-1 pitch over the fence in left center.

“I told Mason, ‘You can’t let Gage have the glory for more than five batters,’: Smrdel joked. “They both hit the ball hard. Gage’s was a line drive and Mason’s was a no-doubter. It’s great to see that kind of pop in the lineup.”

Garfield pulled to within 6-5 with a run in the bottom of the fifth but the Hornets added two very important insurance runs in the sixth.

VanArnhem was hit by a pitch to get the Kirtland leadoff man on base and DeMarco singled to put runners at the corners. After back-to-back strikeouts, Pierce Boyd delivered a clutch two RBI single to give Kirtland an 8-5 lead.

Garfield pulled to within 8-7 after six but Kirtland tallied one more run in the seventh on a two-out triple by Mason Rus, who then scored on VanArnhem’s RBI single.

VanArnhem then shut down the G-Men in order to earn the save.

Mason Sullivan started the game on the hill for the Hornets and lasted three innings. Pierce Boyd pitched two innings on his way to his first career victory. Rus and VanArnhem each threw one inning.

“Mason was struggling a little bit at first and then Pierce Boyd came in and did well in his first appearance of the year,” Smrdel said. “Mason Rus came in and threw strikes. He got out of the sixth and then Reese VanArnhem did a great job shutting it down.”

Offensively, Pierce Boyd was 4-for-4 with three RBI and Gage Sullivan had two hits for the Hornets, who improved to 3-2 on the year.

Kirtland rides second half surge to win over Berkshire