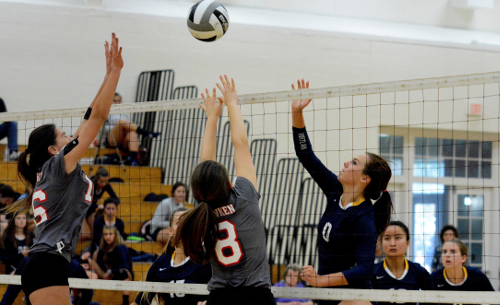 Kirtland comes up short at Hawken

GATES MILLS—Kirtland’s young volleyball team opened Thursday’s match at Hawken with a bang. The Hornets rolled to a 25-15 win in the first set but fell behind in the next four and lost the match, 3-2, in a showdown of teams in the new look Chagrin Valley Conference Valley Division.

“We’re playing better but we’re still young form a varsity perspective,” said Kirtland coach Bob Schenosky. “I only have two returning starters, so they’re getting better and better. It’s obviously a much higher level of competition than they saw last year. We played a good team today. They hustled. Very few balls hit the floor on the other side so that was a good wake up call for our hitters.”

The Hornets, who dropped to 1-2 overall and 0-1 in the CVC, won the first set with timely hitting and airtight defense.

Kirtland at times struggled to react when Hawken returned the ball after a kill attempt.

“Some of our hitters hit the ball incredibly hard for high school girls so when that ball comes back they were a little surprised but that’s a good thing for us,” Schenosky said. “That will certainly help in the weeks ahead and as we go through the conference.”

Taylor Frazee led the Hornets with 7 kills and 15 digs while Olivia Mancisio recorded 6 kills and Sam Bailey and Julia Ricketti both had 5 kills and 6 digs for the Hornets. Lydia Shiffler and Emily Nerderman posted 14 and 12 assists, respectively, and Lauren Snyder had 5 digs.

“Olivia Mancisio, she’s had a couple of great games in a row. She has put the ball down well. She has been smart in the middle,” Schenosky said. “Lauren Snyder, one of our reserves came in today and just played her heart out. I’m really proud of both of them and the rest of our players did a nice job. Taylor Frazee comes to play every match. She hits the floor and I can count on her day in and day out for her effort. Overall we did alright.”

Kirtland hosts Aurora on Monday then travels to Cardinal on Tuesday.