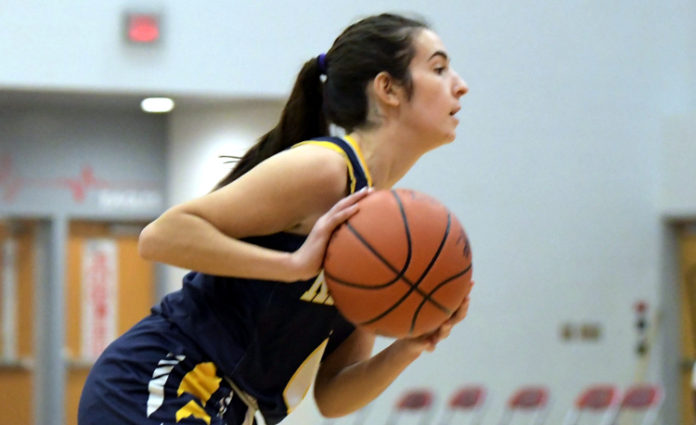 “Coming out of a pause and having three days to practice to prepare was not ideal, but we made the most of it,” said Kirtland coach Brittany Zele. “In the first half, we struggled and did not control the game like we wanted to. I was extremely happy to see our style of play in the second half that sealed the win. It’s what we need to carry over to this upcoming week and tournament.”

Kirtland built a 15-9 first-quarter lead and maintained a 24-18 advantage at halftime.

The Hornets used an 18-6 run in the third quarter to create some separation between them and the Huskies.

Macy McIntosh scored six of her 14 points in that third-quarter run.

“Macy had a minor ankle injury against Geneva before we went on pause,” Zele said. “She is still dealing with that injury and when you can’t tell someone is playing through discomfort that shows how tough they are. I love when girls who are known more for their defensive presence start to show what they are capable of on the other end. She is a threat that teams need to make note of.”

Reilly Greenlee led the Hornets with a game-high 16 points.

She scored eight in the first half as the Hornets slowly took control of the game and finished with six in the fourth quarter as Kirtland sealed the win.

“It was awesome to get back to playing again,” Greenlee said. “We weren’t aware that Geneva would be our last game for a while but we know that is how every game in our season could be, so it’s nice being able to continue because I love the sport so much and our team has a lot of fun playing together. We had to keep calm today on offense because we were a bit too excited to be back, which caused some chaos and mistakes, but once we got it together in the second half we were really able to play off of each other and get the points going.”

Haley Coso contributed to the win with nine points, Corinne Greenlee added eight and Marisa Carmosino pitched in with six.

Ronee Collins and Haley Domen both scored in double figures for Cardinal with 11 and 10 points, respectively.