Kirtland dominant in win over Beachwood 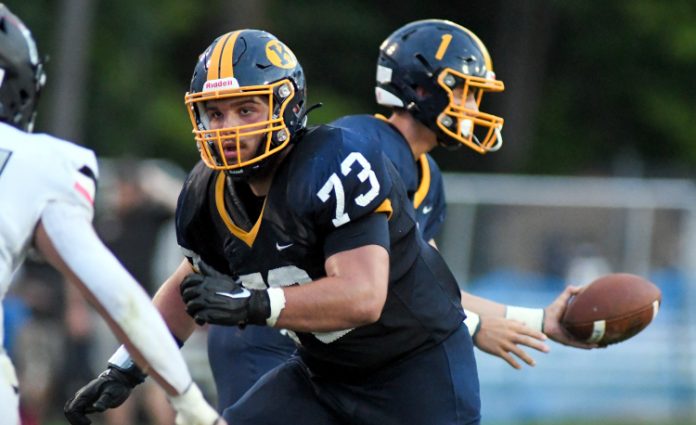 Kirtland was dominant in all phases of the game in a 52-6 win over visiting Beachwood on Friday.

The Hornets outgained the Bison 335-104 in improving to 3-0 and extending their regular season winning streak to 48 games.

“The keys to us having success in the game and in the future are getting the little things right,” said Kirtland senior George Prusock. “It is important for us to be consistent and be a team to get to the ultimate goal.”

Rocco Alfieri scored on an 18-yard touchdown run with 10:47 left in the first half and Gogolin added a 35-yarder just before the break to send Kirtland into the locker room with a 35-0 lead.

Nick Barisic, who finished the game 5-for-5 on extra points, kicked a 25-yard field goal in the third quarter.

Prusock, a two-way lineman, had convinced head coach Tiger LaVerde to allow him to carry the football at some point in the season.

That time was Friday night.

“During the week, I asked coach if I could get a carry later in the season and the way the game was going it felt right for me to get in there,” Prusock said. “I was terrified. I had never seen the backfield view before so it was a little nerve-wracking.”

Nothing would stop Prusock from reaching the end zone on a two-yard run. Xavier Lasecki converted the first of his two-point after tries.

“It was extremely exciting to be one of the scores in the game,” he said. “The fact that we can put ourselves in a position where a lineman can score is pretty cool looking at the rest of the year.”

Beachwood’s MarQuis Pinkney threw a 42-yard touchdown pass to Jake Burkons late in the fourth quarter and Kirtland’s Jack Lessick closed out the scoring with a 12-yard touchdown run.

Jake LaVerde finished the game 7-of-10 passing for 112 yards. Max Paul completed his only pass of the game for 10 yards.

Gogolin led the Kirtland rushing attack with 47 yards on six carries with two touchdowns. A total of 15 different players had at least one carry in the game.

The Hornets, who improved to 3-0, travel to West Geauga next Friday.

“This team is definitely coming together,” Prusock said. “We are getting better each week. We definitely have some things that we need to improve on. We are not even close to the best we can be. Our defense and offense have great leaders that can help the younger guys do what they need to.”

Kirtland pulls away from Riverside