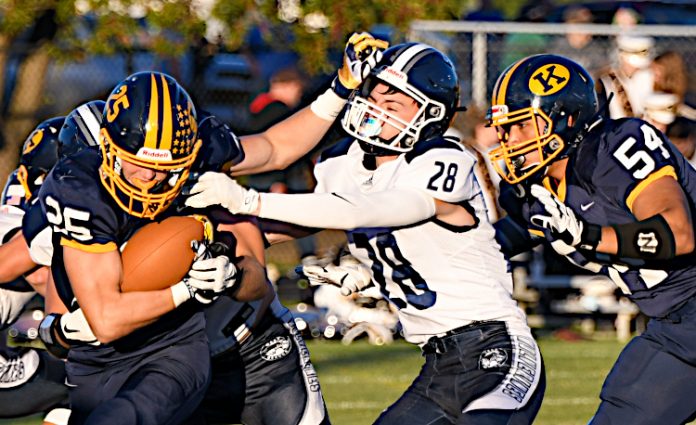 KIRTLAND—Kirtland’s offense racked up 525 yards of offense for the second time this season in a 33-7 win over visiting West Geauga on Friday.

With the win, the Hornets claimed bragging rights over the 8.7 miles between the two schools on State Route 306.

Kirtland also claimed its first win as a member of the Chagrin Valley Conference’s Chagrin Division after previously dominating the CVC Valley Division.

West Geauga won the toss and chose to defer until the second half, which allowed Kirtland the first chance at putting together an offensive scoring drive.

The Hornets moved into Wolverine territory but West Geauga’s defense held and forced what would have been a 43-yard field goal attempt by John Raguz but an offensive penalty turned out to be Kirtland’s blessing in disguise.

Kirtland head coach Tiger LaVerde then chose to go for it on 4th-and-25 from the West G 31. Quarterback Ramon Lescano then threw a touchdown pass to Gage Sullivan, who laid out from the five-yard line and caught the ball on his extended fingertips for the first score of the night.

After Kirtland’s defense forced the Wolverines to punt on their first possession, Tommy Gogolin ran 34 yards for another score and all the momentum went Kirtland’s way.

Another West Geauga punt led to Mason Rus’ 53-yard touchdown run to push the Kirtland lead to 20-0 before the Wolverines had even recorded a first down.

The Wolverines finally found an offensive groove and picked up that elusive first down with nine minutes left in the second quarter. That drive stalled at the West G 49.

Kirtland’s offense started at its own 17 but it took just seven plays for Rus to score for the second time in the game. He plunged into the end zone on a two-yard run that left the Hornets up, 26-0, with 4:21 remaining in the first half.

Lescano threw a 47-yard touchdown pass to Gogolin to close out the Kirtland scoring with 2:06 left in the second quarter.

West Geauga moved to the ball to the Kirtland 28 but a sack left the Wolverines in a 4th-and-23 situation they couldn’t convert.

The Wolverines opened the second half with an 18-play, 80-yard drive that ended with a David Fofana four-yard touchdown run.

Lescano finished the game 6-of-8 passing for 141 yards and the two touchdowns and he added 59 rushing yards on six carries. Rus ran for a game-high 145 yards on 20 carries and Gogolin finished with 72 yards on nine carries. Sullivan recorded five catches for 94 yards.

With the win, Kirtland extended its winning streak to 44 straight games. The Hornets improved to 3-0 overall and 1-0 in the CVC Chagrin Division. West Geauga dropped to 2-2, 0-1.