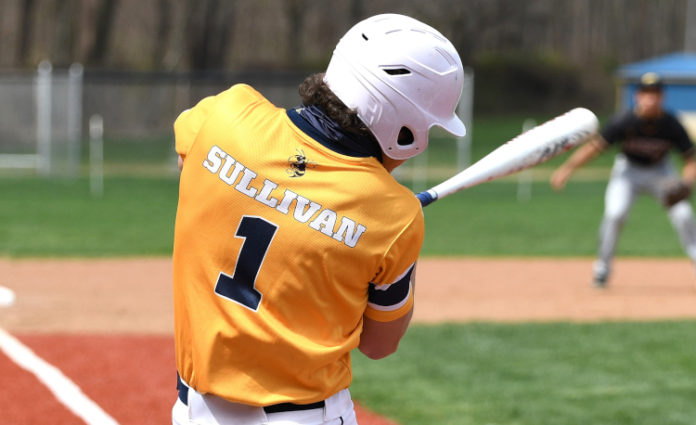 Kirtland’s Magic Number is down to two after a 10-1 win over visiting Edgewood on Tuesday.

The Hornets need just two more wins, or one win and a Berkshire loss, to clinch their second straight Chagrin Valley Conference Valley Division title and sixth in the last eight seasons.

“We have to get it done on a daily basis in the conference,” said Kirtland coach Luke Smrdel. “That’s our No. 1 priority and we’re working toward that. We had a couple of bumps in the road there last week but that gave us some idea of where we needed to improve. We made the adjustments and did a great job today. Hopefully, we can keep that going.”

Mason Sullivan dominated the Warriors on both sides of the plate.

He allowed just one unearned run and struck out 10 in 6 2/3 innings of work and finished his day at the plate 2-for-3 with a run scored, a home run, and he knocked in four runs.

“When he’s going at the plate, the whole offense goes,” Smrdel said. “We did a good job in protecting him today. Guys around him had hits and we got on base and made things happen. That’s what we’re all about at Kirtland. We get guys on base and score runs.”

An error and a two-out single allowed Edgewood to take a 1-0 lead in the top of the first but that was short-lived as the Hornets responded with a run in the bottom half of the inning.

Reese VanArnhem hit a leadoff single and then recorded his 23rd stolen base of the season. Sullivan hit a one-out single to tie the game.

Kirtland erupted for seven runs in the bottom of the third.

VanArnhem drew a leadoff walk and stole second. Andrew Spencer singled to put runners on first and third with no outs.

Sullivan followed with a three-run shot.

“It was a hanging curveball right down the middle and I sat back on it and went over the left field fence,” Sullivan said. “The dugout was pumped. After my home run, we added four more runs that inning.”

Danny Davidson followed Sullivan’s four-bagger with a single and Gage Sullivan hit an RBI double and then stole third. He scored on Pierce Boyd’s sacrifice fly. Anthony DeMarco and Mason Rus both singled and VanArnhem closed out the scoring that inning with a double.

DeMarco doubled and scored in the sixth and Gage Sullivan hit an RBI triple in the sixth to close out the Kirtland scoring.

“Games like this are great,” Mason Sullivan said. “The pitches are getting over and when the bats are working, our team came ready to play and it was a great game.”

Sullivan struck out the first two Edgewood batters in the sixth but the Warriors loaded the bases thanks to an error and a pair of walks.

Anthony Fortuna relieved Sullivan and fanned the only batter he faced.

“My curveball was working really well today,” Sullivan said. “I was changing the speed of it to keep them more off balance and make it hard to time it up.”

Kirtland travels to Edgewood on Wednesday.