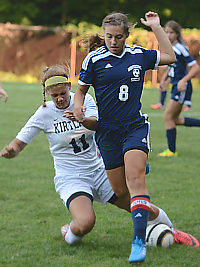 Kirtland head coach Ed Bradac didn’t have much to say to the Hornets following their disappointing 3-0 loss at Lake Catholic on Tuesday. He did let them know if they weren’t ready to play against Independence on Thursday they’d likely suffer their second straight defeat.

Obviously, the message was heard loud and clear as the Hornets dropped the Blue Devils, 4-0.

“It was a good win,” Bradac said. “We had a difficult lost to Lake Catholic on Tuesday. They’re a solid, really good program. We left that game with a really sour taste in our mouth. We didn’t come to play. We weren’t ready to play and we made a point in practice to say, ‘Look, don’t take Independence lightly. They’re a quality team and we need to show up to play. It’s a CVC game and if it’s important to you you’re going to want to beat them.’”

Claire Neibecker and Hannah Vouk both scored in the second half to close out the Hornets, who redeemed themselves with a solid win over a quality opponent.

“It was (redemption),” Bradac said. “We even commented after the Lake Catholic game that I feel bad for Independence if they come out and play the way I think they can play.”

The game didn’t go as well for the Blue Devils, who fired off just four shots on goal.

“We just didn’t show up today,” said Independence coach Bryan Less. “Their effort was mostly there in the second half. Both their goals were off rebounds, not that I’m blaming my keeper. I thought she helped keep us in it again. I just thought we were lackluster today. It was kind of an off week for us because we were lackluster on Tuesday as well.”

Sophomore Krista DeFini continued to show improvement as she develops in the net. She recorded 13 saves.

“She did a good job. She’s doing well,” Less said. “This is only her sixth or seventh game overall and fifth of the season. She’s doing a nice job. It’s unfortunate a couple of those rebounds went off her but it happens.”

“I thought Olivia Jones played a real nice game; good effort. She played outside mid and outside back in the second half,” Less said. “Nora Baran, she played center mid mostly and she played a little outside back too. I thought that was two people that brought some good effort and intensity today. That’s mostly what we were lacking.”

For Kirtland, it was a total team effort that started with the four scorers and carried over onto the other side of the field.

Bradac moved Hallie Ward back to bolster the Hornets’ defense.

“We’re trying to figure out where everyone needs to settle in,” he said. “I think we forget how good our defense was last year so we’re trying to rebuild it from what we had last year. Hallie doesn’t play back there, we put her back there and she just does a solid job. She’s coming back from surgery and that’s the first game we didn’t take her out. She played a full 80 minutes. I’m very proud of the way she played.”