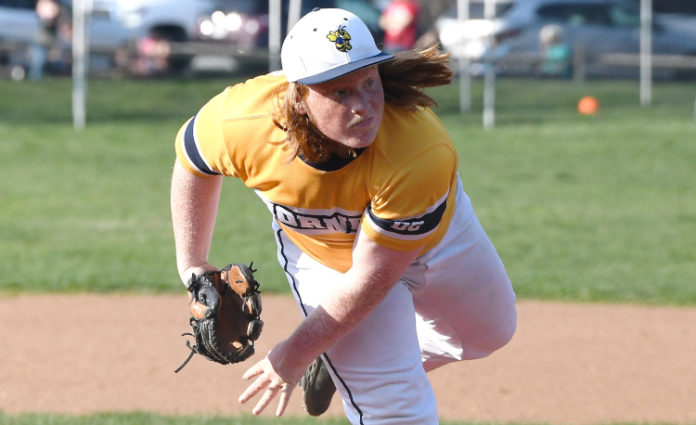 A day after needing 10 innings to beat Grand Valley, Kirtland’s baseball team traveled to Orwell and beat the host Mustangs, 7-0, to complete the season sweep of its conference rival.

With the win, the Hornets improved to 9-2 overall and 6-0 in the Chagrin Valley Conference Valley Division.

“We talked before the game and I told the guys we need to get a lead right away,” said Kirtland coach Luke Smrdel. “After a game like yesterday, getting the lead was the number one priority today and we came out and did that.”

Kirtland scored two runs in the top of the first inning on two hits and a walk.

Danny Davidson, the hero of Monday’s 2-1 10-inning win, started the rally with a one-out single. Mason Sullivan then walked and both runners moved up a base on a groundout. Anthony DeMarco then hit a two-out single to score Davidson and Sullivan crossed the plate on an error.

The Hornets added single runs in the third and fourth innings.

Withrow then led off the sixth with a double and Andrew Spencer singled to put runners on the corners with no outs. Withrow stole home and Spencer scored on Davidson’s single to make it 6-0.

DeMarco walked in the seventh and scored on Mac Boyd’s single to close out the scoring.

Davidson finished the game 3-for-4 while Sullivan, Withrow, and Spencer each had two hits.

“Top to bottom today we had guys who contributed offensively,” Smrdel said. “We made some adjustments from yesterday and were able to get some clutch hits.”

“Andrew threw another gem,” Smrdel said. “I love watching him pitch because he’s got all the tools of a great pitcher. Both Andrew and Mason got ahead of batters, which is the key to success on the mound.”

Kirtland has now won seven straight after opening the year 2-2. Four of those wins were by two runs or less.

That success has been fueled by a lineup where every game it’s a different player stepping up to deliver a clutch hit or pitching performance.

“It’s great to see so many different guys contributing on a daily basis,” Smrdel said. “If one guy has a bad day, other guys are picking them up with their contributions.”