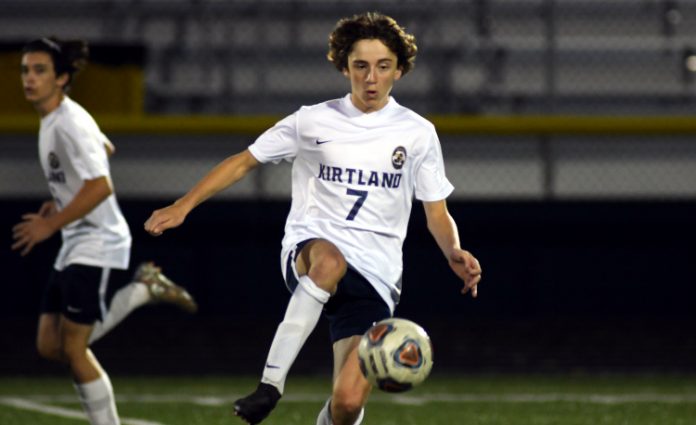 Kirtland closed out the league play portion of its schedule with a 6-0 win at Edgewood on Tuesday.

With the win and Berkshire’s win over Geneva, the Hornets and Badgers earned a share of the Chagrin Valley Conference Valley Division title. Kirtland improved to 10-2-1 overall and finished 6-0-1 in league play.

“Sharing the title is a bit bittersweet, but we’re proud to have a partial claim,” said Kirtland coach John Valentic. “The playoffs are an entirely different beast from the regular season, so having some success and playing well should give us a boost as we approach the postseason.”

Vince Carriero and Austin Leland both scored two goals for the Hornets while Vince Vukovic and Owen Mueller each found the back of the net once.

Anand Sundararajan contributed to the win with two assists while Vukovic and Drew Duncan each had one.

“We changed our formation that put players in some different positions and responsibilities,” Valentic said of the Kirtland offense. “The boys responded well with their movement off the ball and unselfish, early passing.”

Jack Green recorded one save and a seventh clean sheet on the season.

Kirtland closes out the regular season with games against Open Door on Oct. 6, at Beachwood on Oct. 11, and a home contest against Independence on Oct. 13.

“I’m really happy with the way we’ve been playing as a team,” Valentic said. “We’ve seen so much individual improvement that has translated into great decision-making on and off the ball as a collective unit. We’re excited to make another run for the district title.”