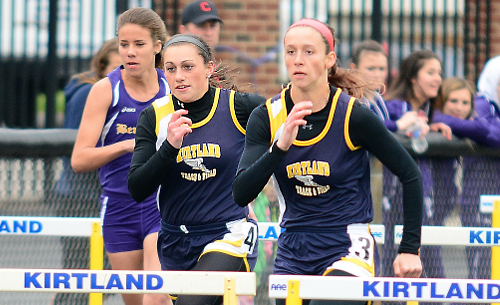 KIRTLAND—Last spring, Kirtland’s girls’ track team won its first conference championship in over a decade. The Hornets didn’t wait nearly as long to win their second.

Just three points separated the Hornets from runner-up Berkshire. Kirtland finished with 139 points while Berkshire had 136.Cardinal was third with 48 and Fairport Harding finished fourth with 24.

“We knew all season it was going to be really close,” said Kirtland girls’ coach JP Moran. “They’re always tough. We haven’t won the CVC in a long time so last year was so huge. We talked about the whole week having a chance to repeat. That’s something we haven’t had a chance to do in a long time. It was just awesome.”

Moran spent most of the day on Sunday piecing together the lineup that would maximize his team’s point total. His strategy paid off as the girls won six individual events and finished second in 10 others.

Kirtland also had several athletes finish third through fifth as every point mattered in winning the meet.

“The lineup was due at 7:00 p.m. on Mother’s Day. I couldn’t think about anything else. I was going over the lineup in my head trying to move the girls around to see what would give us our best shot to win,” Moran said. “It didn’t matter because the girls, they just all stepped up and did everything they needed to. They were aware of the score the whole time. I was aware of it and we were letting them know. They did everything that we needed them to do to get it by three. It was just huge for us.”

Katie Straus made a case for a second consecutive MVP award with three individual conference titles in the 100 and 300-meter hurdles and the high jump and she also anchored the Hornets’ 4×400-meter relay team that finished second.

“Having someone like Katie Straus on your team is fantastic,” Moran said. “She won both hurdles, the high jump and anchored our 4×4. She’s going to be under consideration, in my opinion, for MVP but all the coaches vote on it.”

Clarice Aquila, Kristi Bryll, Isabella Powers and Emily Kadas combined to win the 4×1 in 55.38 seconds and Aquila, Grace Powers, Jessica Hepper and Kadas won the 4×2 in 1:55.25.

The Hornets gained valuable points in the distance events, which historically have been dominated by Berkshire.

Walsh and Sarah Kadas finished second and fourth in the two-mile and Snyder and Lauren Covetta did the same in the mile.

“Obviously Berkshire’s distance crew is phenomenal,” Moran said. “I told Christine if they take 1-2 (in the two-mile) they could take the meet. She got second. She ran a great race and (set a personal best) by like eight seconds. Sarah Kadas got fourth for two points and that means a lot.”

Snyder’s 5:39 mile set a new PR and her second place finish was a huge advantage for the Hornets. Covetta earned two points by finishing fourth.

“One performance that really stood out to me was Sydney Snyder, a freshman in the mile,” Moran said. “Berkshire’s girls are seasoned veterans in the mile and she went out there and she ran as hard as she could and PRd in the mile with 5:39. She ended up runner up but her and Lauren went 2-4 in that. We told them they had to break them up and they did. It was phenomenal. It was really exciting to see her race like that. She really got after it and raced really hard.”

“I’m extremely proud of the effort of these kids because we didn’t have a lot of numbers on the track and we have a lot of kids spread out doing a lot of events and that’s where Cardinal and Berkshire had too many kids,” said Kirtland boys’ coach Tom Henderson. “We were in first place midway through the meet, which was a complete surprise because I thought we would be in the hunt but I didn’t think we would be leading.”

The boys won both the 4×100 and 4×200-meter relays and Will Armstrong cleared 12 feet in the pole vault to win that event.