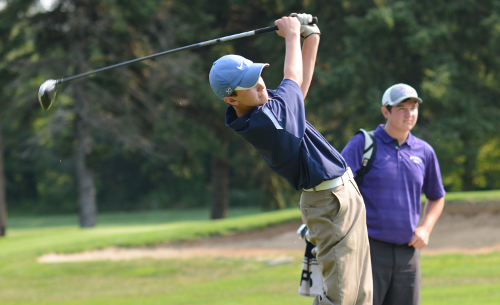 Depth proved to be the difference in Kirtland’s 175-182 win over host Independence in a key Chagrin Valley Conference match on the back nine at Astorhurst Country Club on Tuesday.

Each team’s No. 1 carded a sub-40 but it was Kirtland’s third and fourth golfers that made the difference.

“I am very proud of our guys,” said Kirtland coach Greg Cosimi. “They really won a tough match today against Independence.”

Michael Schnur led the Hornets with a 37 and Daniel Heimsoth came through with a 44. Michael Johnson recorded a 45 and Brian Beres shot a 49 for the Hornets.

“Schnur really showed why he's playing number one with a 37,” Cosimi said. “Daniel also played really tough in the last group with a 44. That 44 won us the match.”

Tyler Wilson was one stroke behind Schnur at 38 and Nick Brunsman fired a 40 for the Blue Devils.