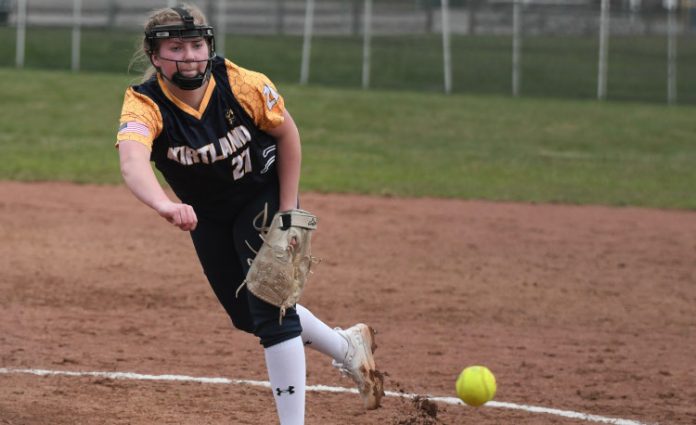 Madison Matijevic hit a home run and Gianni Cantini was 3-for-3 and struck out 10 in leading Kirtland to a 5-4 nonconference win over visiting Lake Catholic on Saturday.

The Hornets jumped out to a 4-0 lead and then pitched out of a jam in the sixth to seal their win.

“It was huge to get that win today,” said Kirtland coach Jamie Kamensky. “Going 3-1 on the week is great, especially being able to hold on to a close game with substitutes in the lineup. It’s great to see we have depth off the bench that can compete in close situations.”

Cantini was scheduled for a day off in the circle but being the workhorse she is, she wanted the ball.

“I talked to Gianna before the game and said, ‘Hey, I think I’m going to DP you today,’ and she said, ‘No, I’m pitching.’ That’s the type of kid she is,” Kamensky said. “She wants to compete and lead and to be quite honest, she is one of the best competitors I’ve ever coached. To see her succeed and to see what she really has helped to build for us is just so heartwarming. Proud is an understatement. The girl is a boss.”

Cantini walked the first batter she faced, who was subsequently thrown out trying to steal second, and then struck out the next eight Cougars.

Her dominance allowed the Hornets to build an early 4-0 lead with two runs in the second and two in the third.

Cantini started the second inning rally with a leadoff single and scored on Nikolena Samac’s RBI single. Malia Becker followed with a single and then Ava Puruczky hit a two-out single to give the Hornets a 2-0 lead.

Matijevic hit a two-out solo home run in the third and Cantini doubled and scored on Gianna DiFranco’s RBI single.

“Mattey and Gianna are one of the most dangerous 3-4 combinations in the area,” Kamensky said. “These two feed off each other and really unleashed today. They are beyond clutch every day but today it was great to see them really rope the ball.”

Lake Catholic recorded its first hit of the game with one out in the fourth. A two-out double cut Kirtland’s lead to 4-1.

Kirtland responded with a run in the bottom half of the inning when Becker led off with a single and scored on another single by Puruczky.

The Cougars made a final run at the Hornets in the sixth.

They scored three runs on four hits and a walk before Cantini worked out of the jam.

“It was really exciting to pitch well today,” Cantini said. “I try to keep things simple, throw lots of strikes, and respect the best hitters. Mattey Matejevic, our catcher, my compadre, is the key to any pitching success I have. She is such a great athlete. I’m so lucky to have such an amazing teammate to share this experience.”

Cantini allowed four runs on six hits and struck out 10.

“It was a big deal for us to pull out these wins,” she said of Kirtland’s big week. “We knew these games were going to be close and could definitely be a turning point in the season. To pull through with some great hitting was how we pulled off these wins. Grace Mastrangelo really showed up these past two games after coming back from a concussion. Grace is like a bottle rocket.”

As good as she was in the circle, she was perfect at the plate with three hits, two runs scored, and a double.

“I love hitting, I just love it,” she said. “I work really hard on my swing so I enjoy when it pays off. Despite how much I love hitting home runs, singles and doubles will also do the job.”

Becker and Puruczky both finished the game 2-for-3 and Boyd, Matijevic, DiFranco, and Samac also had hits.

“Our lineup is just focused and zoned in right now,” Kamensky said. “We just need to keep it rolling.”