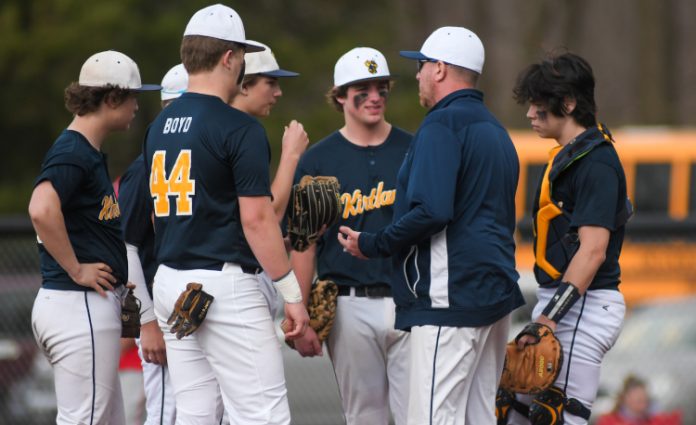 KIRTLAND–Sometimes, the most action-packed parts of a book or movie don’t tell the whole story.

Such was the case on May 16 as Kirtland hosted Jefferson in a Division IIII sectional semifinal.

It would be very easy to point to the Falcons scoring seven runs in the top of the eighth on the way to an 11-8 win as all you need to know, but the Hornets might disagree.

Kirtland (11-11) certainly had its chances, but a frustrating afternoon turned into an early-evening ouster from the postseason after Jefferson’s big inning in the eighth.

“If we could have got guys on base and moved them around like we’ve been doing this year I think it would have been a different story, but it’s tough when you can’t get guys on base,” Kirtland coach Luke Smrdel said. “We had some opportunities early and put some pressure on them, we just didn’t get much going in the middle of the game.”

Kirtland jumped out to an early 2-0 lead before Jefferson scored the next four runs. The Hornets tied the game at 4-4 in the bottom of the fourth and the game remained tied until the top of the eighth.

Pierce Boyd started on the mound for Kirtland and pitched well into the top of the seventh. Boyd also helped himself at the plate as he finished 2-for-4 with a double, a run scored, and a run batted in.

Luke Chuko and Trip Thaler also collected two hits for the Hornets and Thaler and Gage Sullivan both led the team with two RBI.

Chuko, Mason Rus, Tommy Gogolin and Will Bates all made big plays on the bases and at the plate as the comeback came up just short.

“I think frustrating is a good word to use for this game, we feel like we had chances, but it was good to see the fight in the eighth inning,” Gogolin said