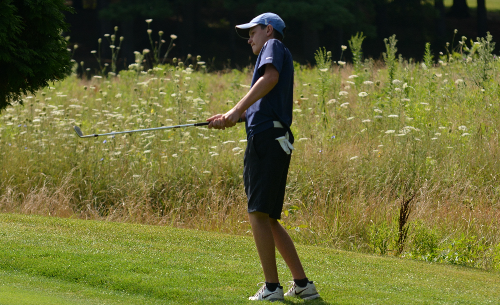 Michael Schnur has big shoes to fill for the Kirtland Hornets this season and they don’t belong to his older brother John, who graduated from Kirtland in 2014 and now plays golf at John Carroll University.

Schnur had a remarkable freshman year, which ended with league MVP honors. He opened his sophomore campaign by winning medalist honors at the Chagrin Valley Conference preseason tournament and on Tuesday he won another event with a 76 to lead Kirtland to a second place finish at Geneva’s Bronko Invitational at Hemlock Springs.

"Michael played a very solid round,” said Kirtland coach Greg Cosimi. “I think he might tell you that he left some shots out there. His 76 included 16 pars, a bogey and a triple bogey. "

Despite the triple bogey Schnur played a confident and consistent round.

"On the 13th hole, Michael asked me where the water was as he couldn't see it from the tee,” Cosimi said. “After I explained that anything right of the 150 marker could roll into the hazard, he calmly pulled out his driver and striped a drive right down the left hand side of the fairway. One of the opposing coaches remarked that he was very confident and controlled on that shot. This is the kind of thing I've come to expect from Michael."

Schnur wasn’t alone in performing well on the course.

Michael Knezevic and Adam Mueller both carded 85 while Brian Beres finished at 86 and Jack Dever fired a 94. Daniel Heimsoth finished with 106 strokes to pace the Hornets, who finished just three strokes behind tournament champion Perry, 329-332.

"I felt like we played well today,” Cosimi said. “Conditions for scoring were very good. The temperature was not very hot, the greens were soft, and there was a little breeze. Combine that with our talented host of golfers, and you get a great team score of 332. The last time we shot a score like that was when state tournament veterans, John Schnur and Anthony Messner were seniors. To me, this is a sign things to come for our team."

Mueller’s score was a career low.

"An 85 from Adam Mueller was key,” Cosimi said. “As a freshman, this was only his second varsity match. I was very proud of his performance today.”

Kirtland plays at Garrettsville on Wednesday and will compete in the Cardinal tournament on Friday.