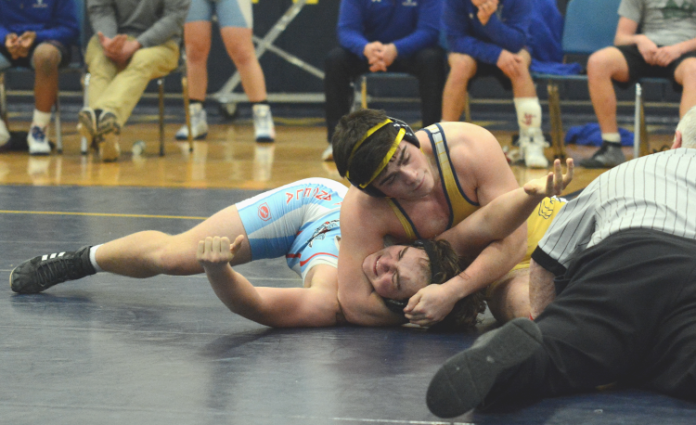 KIRTLAND—Seven Kirtland wrestlers finished 2-0 on the night to lead the Hornets to a tri-match sweep of visiting St. Ignatius and Villa Angela-St. Joseph on Thursday.

“We were pretty happy,” Kirtland coach Scott Francis said. “We had a good evening and the guys were wrestling pretty well.”

Louka Babic, Brayden Adkins, Brennon Braud and Anthony Gencarelli each pinned their two opponents and Will Davidson, Carter Williamson and Aidan Marsh also finished the night 2-0. Davidson and Williamson both recorded a pin and a decision.

“Those are our better guys but we also have guys that haven’t had as much success that were hitting moves and looked really good tonight,” Francis said. “Brennon Braud has been looking really good tonight at 182. Aiden Reed has really been coming along with his wrestling the last couple of weeks. That’s what we like to see, is that constant improvement.”

Reed and Gaetano Savelli both went 1-1 on the night.

Savelli closed out the evening with a pin over VASJ.

“That was a nice match,” Francis said of Savelli’s win. “He knows how to wrestle but he’s making some adjustments going from junior high to high school. Once he makes those adjustments he’s going to do very well.”

Warren Eveland added a forfeit for the Hornets, who travel to Perry on Friday.