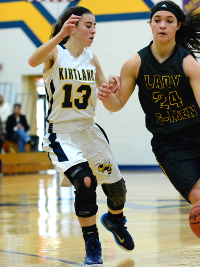 Kirtland gets defensive in 52-41 win over NDCL

Kirtland forced 26 turnovers and the Hornets made the most of their own offensive opportunities in a 52-41 non-conference win at Notre Dame-Cathedral Latin on Tuesday.

The Hornets, who improved to 1-1 on the season, knew what to expect from the Lions and perfectly executed their game plan.

“It was a good win,” said Kirtland coach Bob Bell. “The kids came out and played a phenomenal defensive game. We knew that NDCL has a good team and we knew that they like to penetrate and shoot off the dribble well. We were kind of prepared of it.”

NDCL outrebounded Kirtland, 30-25, but the Hornets created their shots on the offensive end of the floor and didn’t miss many.

Samantha Achauer led all scorers with 24 and Taylor Somodji and Sydney Snyder contributed with 14 and 8, respectively, for the Hornets.

The scoring outburst might have been a bit unexpected considering the Hornets are missing three post players due to injury.

“(Achauer) had a nice game, she really did,” Bell said. “We’re still hurting because we lost three of our inside girls. That made a huge difference. We’re trying to cover those spots with guards and they’re just playing as hard as they can play and getting as much out as they can get.”

The Hornets were just as good on defense.

“We had good pressure on the ball and a lot of help-side defense. We’ve been working really hard on attacking pressure ourselves because NDCL certainly applies pressure,” Bell said. “They had some nice looks but the ball didn’t go in for them. I think our defensive pressure had a lot to do with it. I was very pleased.”

Kerri Zalba and Grace Powers had a lot to do with Kirtland’s success on defense and in moving the ball up the court on offense.

“They did an outstanding job both defensively and in handling the ball for us against pressure,” Bell said. “They alternated at the one and two guard. They did a really nice job.”

Lexi Hammer led NDCL with 11 points and Samantha Flowers pitched in with 10.