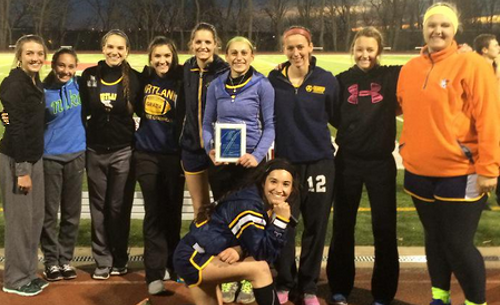 Kirtland girls’ track coach JP Moran dug deep into his bag of tricks to inspire his athletes heading into the 16th Annual George Gross Invitational at Cuyahoga Heights. At practice last week Moran showed off the plaque his athletes won last season when they scored 194 points to win the 2014 team title.

That strategy paid off as the Hornets defended their title with 166 points. Beachwood was second with 121.

“It was really exciting,” Moran said. “We had a lot of points. I don’t want to say I was surprised, maybe impressed.”

Moran had reason to be stunned by the Hornets’ performance as it was their first meet of the season.

“We had a home meet that got canceled previously, so it was our first meet,” he said. “We really have a lot of freshmen on both sides (boys and girls). We had some time trials at practice but no competition times to go off of so we had to place people and go with it. I’m really happy with everything.”

Claire Neibecker helped Kirtland’s cause with a first place finish in the long jump (14-9). Neibecker missed all of last season with an injury and returned this year with a new technique after having surgery on her left ankle.

“We actually had to switch the foot she jumps off of,” Moran said. “She had surgery and still went out and wins it. She also popped over and did the high jump for us. She’s been working on it a little bit with Katie and got us a point there as well.”

“We were runner up in two of the sprint relays to Beachwood. They have tremendous sprint relays,” Moran said. “We had a lot of young kids who haven’t run for Kirtland that scored some points. It was awesome.”

Aquila is one of the most experienced athletes on those sprint relays.

“She is a veteran sprint relay lead off for us,” Moran said. “She led off the 4×1 and 4×2 and had two really solid lead off legs tonight. She helped with the hand-offs all week too.”

Snyder, who set the Kirtland Middle School record in the 800 last year as an eighth grader, finished second in that event on Tuesday with a time of 2:35.42.

Will Armstrong, Matt Grazia and Jon Guenther all turned in top three finishes in their individual events.