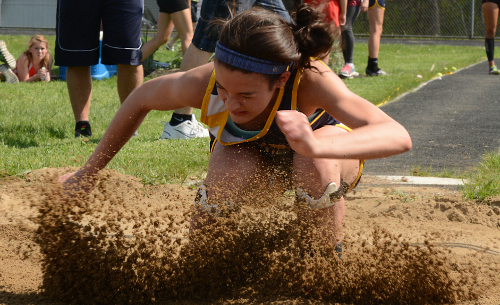 Kirtland’s girls’ track team turned in another strong performance with a third place finish at the 2015 Gene Kobus Perry Relays at Alumni Stadium in Perry on Saturday.

The Hornets’, who scratched two events due to a shorthanded roster, finished tied for third in Division B with Harvey, just eight points behind second place Wickliffe. Woodridge finished first with 89 points.

“I was really happy with that,” said Kirtland girls’ coach JP Moran. “Wickliffe got us by eight points and that was for a trophy. That’s as close to a trophy on the girls’ side at Perry that I can remember.”

With several athletes absent for ACT testing, the Hornets did not compete in the hurdles or pole vault and lost out on the opportunity to earn valuable points.

“We knew going in that scratching two events was not going to help us,” Moran said. “Missing those girls we just didn’t have enough hurdlers or vaulters to compete. Those are two you can’t just throw somebody in there.”

“We would have won both divisions, even the A division,” Moran said. “The time that we ran was two seconds off a 27-year old school record going back to 1988. That was 1:54 and some change and we ran 1:56 and some change.”

Moran, not knowing what to expect out of this group, seeded the girls with a time of 2:00 flat. They exceeded his expectations.

“We have some new girls in there,” Moran said. “This is Grace’s first year with us and Bella has primarily been a long jumper. She did really well in the long jump but I saw some stuff at practice and said I have to get these girls more involved. Katie anchored us with a 61 (second leg). She ran like an animal. It was something to see.”

Lauren Covetta, Sydney Snyder, Angela Ritossa and Christine Walsh combined to finished second in both the 4×400 and 4×200 meter relays and third in the distance medley.

“I thought those girls had an outstanding day,” Moran said. “They were extremely consistent all day long. We finished second to Woodridge in a couple of those spring relays and they are outstanding, so to be runner up to them in a couple of events was really good.”

“We have a freshman in there, Jessica Hepper, and she’s been very consistent so far,” Moran said. “Clarice is leading it off and Kadas brings it home for us at anchor. I put Grace Powers in the second spot and she ran probably the second best leg behind Emily Kadas.”

“That was good,” Moran said. “We were missing a girl or two with the ACT and other stuff going on. Anna Johnson and Danielle Bryll both ran solid in the middle and Grace said she’d be in it because we needed somebody and led us off with a 65. Katie brought us home with a 65.”

Straus also won the high jump when she cleared 5-2.

“That was really close to her PR,” Moran said. “She has our school record of 5-4. She’s done that once and she hit 5-3 once. To hit 5-2 at this point in the season is really good for her. She looked great.”

“They’re jumping very well,” Moran said. “Bella doesn’t have that many jumps this year and Claire was out for a whole year. I’m really looking forward to watching them improve this season because they’re only going to get better.”

“I’m pretty happy with the shot and the discus,” Moran said. “Kara is getting some very respectable throws and Lauren has been very steady for us too.”

Matt Grazia was Kirtland’s top individual with a third place finish in the pole vault (11-6) and the 4×100 meter relay team of Steven Kusar, Anthony Porter, Hunter Samf and David Kardum also finished third with a time of 53.00.

Kirtland’s other top 10 finishers included Ethan McCaslin, sixth in the pole vault, Caleb Cardon, fifth in the high jump, Kardum and Kusar, fourth and ninth, respectively, in the discus throw and Samf, who was eighth in the shot put.