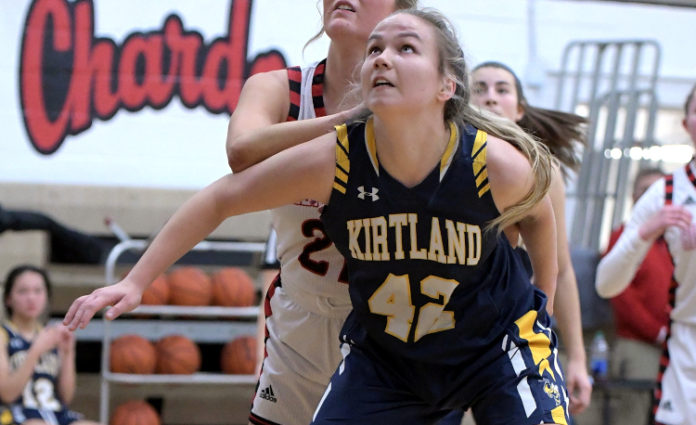 Haley Coso and Reilly Greenlee combined for 29 points in leading Kirtland to a 52-34 win at Grand Valley on Wednesday.

With the win, Kirtland improved to 3-0 in the Chagrin Valley Conference Valley Division while Grand Valley suffered its first league setback.

“We struggled in the first half with our shooting percentage,” said Kirtland coach Brittany Zele. “We missed a lot of easy layups and shots but the girls were able to stay positive and keep at it with offensive rebounds and put-backs. They are very talented at creating for one another out of our offense, which leads to a lot of shots.”

The Hornets, who will travel to Berkshire on Saturday in a battle for first place, opened the game with a 16-6 first-quarter lead.

That advantage grew to 26-15 at halftime and the Hornets entered the fourth quarter up 40-25.

Coso scored eight of her game-high 15 in the final eight minutes to keep the Mustangs from pulling any closer.

“Coach Zele set individual goals for each player on the team and she tasked me with a double-double,” Coso said. “Throughout the game, I kept thinking of this goal and it pushed me to make more offensive moves under the basket and box out. This was also our first game with spectators, so I might have had more of a motive to perform for my family.”

Coso and her teammates had a difficult challenge on the defensive end in slowing down Alexis Mahaffey, who finished the game with 11 points.

“They definitely put up a fight and had the heart, but I believe our conditioning helped us win that game,” she said.

“We switched up our defenses a few times and ended up staying in a zone, which helped take away looks,” Zele said. “A lot of her points came from offensive rebounds, which is something we need to really focus on and improve on to avoid that happening again.”

“Reilly did a great job on defense and decision making,” Zele said. “Haley came through for us in the fourth and Marissa had an excellent game. She had a couple rough games so it was great to see her on top tonight. Corinne had an offensive attack mindset where she looked to score more, which is what we need her to continue to do.”