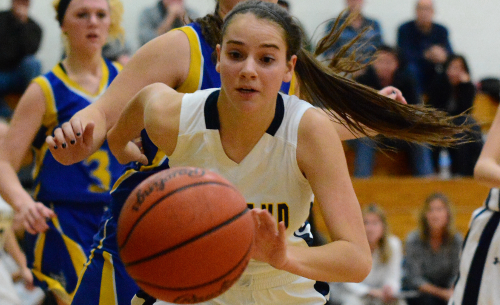 Samantha Achauer scored a game-high 27 points but it was Kirtland’s defense that made the biggest impact in a 50-46 non-conference win over Aurora on Tuesday.

“It was a defensive battle, there’s no question about it,” said Kirtland coach Bob Bell. “Our kids just came out and played phenomenal defense against a pretty talented team, particularly a team with a good inside attack.”

Aurora had a decided height advantage but Kirtland’s effort and 2-3 zone helped the Hornets to win the battle in the paint. With Achauer and Sydney Snyder, who scored 12 points, leading the way on offense the Hornets pulled out their fifth straight win to improve to 6-3.

“We played some 2-3 zone and then finished off with man-to-man. The kids just really did a good job defensively keeping pressure on every shot, getting their fair share of rebounds,” Bell said. “For being outsized at almost every position our kids did a good job both on the boards and defensively.”

Claire Neibecker stepped up her game on the defensive end and limited Aurora’s second chance opportunities.

“She did a phenomenal job in the middle because in our opinion we felt that they were most dangerous against us because of the size difference,” Bell said. “We felt that was key and she did an outstanding job playing defense in the middle of the zone. We had some good defense out of our guards keeping pressure on the outside shooters too.”

That defensive pressure led to more offensive opportunities and Achauer and Snider made them count.

“Sam was just doing a great job on dribble penetration getting shots and to the foul line,” Bell said. “Sydney, she was just knocking down several of her medium range jumpers. She got to the line and made some shots in the second half.”

The Hornets struggled at the free throw line in the first half, converting just 1-of-9 attempts, but improved dramatically in the second half to finish the game 12-of-27 overall.

“Kerri Zalba did a great job defensively,” Bell said. “Taylor Somodji just beat herself up on playing defense and getting steals and getting on the floor.”

The Hornets travel to Villa Angela-St. Joseph on Saturday.