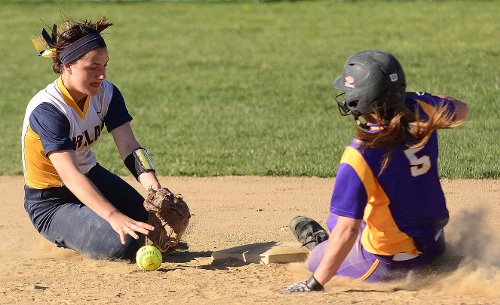 BURTON—Berkshire and Kirtland have long dominated the Chagrin Valley Conference Valley Division with the Hornets winning the past two league titles.

Berkshire’s 9-1 win at Kirtland on April 15 left the Badgers in control of their own destiny this season, but the Hornets reclaimed their share of first place in the league with a dramatic 11-10 8-inning win at Berkshire on Wednesday.

“It was definitely a fun game to watch as a fan, but as a coach it was definitely nerve-wracking,” said Kirtland coach Tony Scibelli. “It was a back and forth battle. I told the girls this afterwards; this is where we’re at a team now. When we’re actually playing poorly we’re still able to get wins now.”

The win was the ninth straight for the Hornets, who improved to 9-2 overall and 5-1in the CVC. Berkshire dropped to 7-4, 3-1. Both teams will share the league title unless one stumbles down the stretch.

Kirtland certainly found its balance early in the game as the Hornets scored five runs in the first two innings and kept the Badgers off the board.

Berkshire slowly battled back into the game with two runs in the bottom of the third and four in the sixth to tie the game at 6-6.

“We made a few too many mistakes, for sure, and we kind of dried up there offensively for three or four innings but it’s great to get this win,” Scibelli said. “That Berkshire team has come a long way. They’re a good team.”

The Badgers stole the momentum when they batted around in the sixth and had a chance to win the game in the seventh but the Hornets came up with some clutch defense to force extra innings.

Berkshire junior Shannon McGee, who walked to lead off the sixth, opened the seventh inning with a line drive up the middle. Kirtland shortstop Hallie Ward dove to her left and robbed McGee of a base hit.

“Shannon is an awesome hitter,” Ward said. “I was watching how she was lining up. I knew she was going to hit it hard so I was kind of playing deep. I know you’ve got to go all out.”

Malia Miller also lined out and Ward ended the inning when she threw out Makahla Ricci at first.

The Hornets then went to work on offense.

Rebecca Kissinger walked, Danielle Meyer reached on an error and Danielle Davis laid down a perfect bunt to load the bases for Ward, who dropped a single in front of Berkshire’s right fielder to score two runs. Samantha Achauer then singled and Ward scored on Olivia Mancisio’s base hit to make it 10-6.

Achauer would score on Sarah Steigerwald’s sacrifice fly to put the Hornets up 11-6.

Gabby Skolaris and Erin Drew both walked and advanced to second and third on passed balls. Both scored on Casey Sinkenbring’s single. Sinkenbring, who took second on an overthrow, stole third and scored when Samantha Cannella reached on an error.

A fly out temporarily halted Berkshire’s momentum but Catherine Lillibridge and McGee singled to load the bases with the Badgers trailing 11-9. Cannella scored on another Kirtland error to make it a one run game with the bases loaded and one out.

The Hornets got the second out when Ricci hit a ground ball and the Hornets threw to the plate for the second out. Skolaris then hit a bomb to center field but Achauer got a good jump on the ball and made the catch to end the game.

“I wasn’t even thinking about the situation,” Achauer said. “I was just thinking about making the best play that I could that play. It felt amazing. I didn’t even realize we won the game at that point. I just saw all these people running toward me and it felt so great.”

Ward was 3-for-5 with two doubles and a run batted in to lead the Hornets’ offense. Achauer, Mancisio and Steigerwald all had two hits for Kirtland. Lillibridge and Miller led Berkshire with two hits each.

Colleen Baldrey pitched the eighth to pick up the win for the Hornets, who put their nine-game winning streak on the line at Conneaut on Friday.

“This was definitely something we knew was going to be a tough test,” Scibelli said. “The winning streak is great but it’s not a goal of ours to have a long winning streak. Our goal is to win the CVC and make it to districts and hopefully a little farther than that. We’re just happy to get a win in a game like this.”