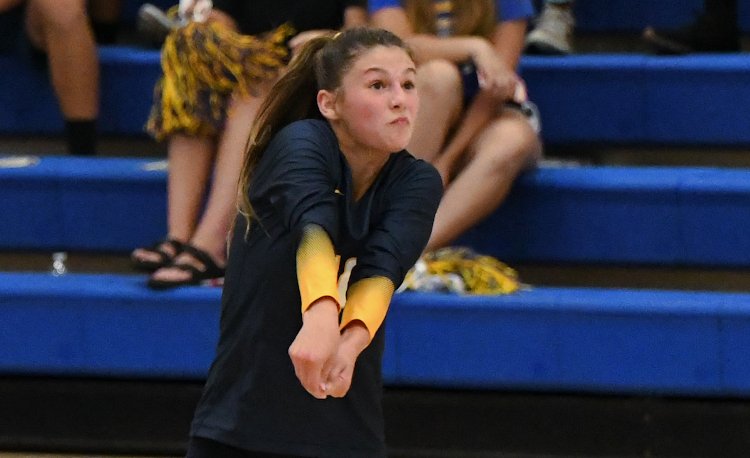 Kirtland defeated visiting Cardinal 3-1 on Monday in a battle for first place in the Chagrin Valley Conference Valley Division.

“We had a very specific game plan leading into the game and executed it well,” said Kirtland coach Arlayna Newcomer. “We’ve used our past mistakes to get better and I’m so proud of them for that.”

Kirtland won a back-and-forth affair in the first set but the Huskies responded with a win in an equally intense second set.

“The girls know to expect all teams that we play to battle the whole time,” Newcomer said. “We knew it wasn’t going to be a cakewalk and we were prepared for the challenge.”

Nina Loncar found her groove and led the Hornets to a sweep in the final two sets. She finished the match with 20 kills. Ave Golem was a thorn in Cardinal’s attack as she recorded 40 digs in the back row. Katie Reynolds led the Hornets with 47 assists.

Kirtland improved to 4-1 overall and 4-0 in the Valley Division.

Despite their place atop the league standings, the Hornets are focused on maintaining that position throughout the season.

“We talk about taking it one game at a time,” Newcomer said. “We’ll take tonight to celebrate the win but tomorrow we’re focused on our next game.”

Cardinal’s senior-laden team traveled to Kirtland looking to knock off the defending league and district champions.

The Huskies came up short but are eager for the rematch at Cardinal in October.

“Kirtland is a tough team. A lot of their players play JO and they are experienced,” said Cardinal coach Karisca Chambers. “I knew it was going to be a battle going in. Silver lining for us is we get to play them again.”

Chambers was especially pleased with her team’s resiliency after dropping the first set.

“They don’t dwell on things that’s didn’t go our way,” she said. “They grieve for a bit and then shift their focus to the future. We are always looking ahead. Plenty of games left in our season, this isn’t the end all be all.”

Karalyn Rutkowksi had a big night in recording 10 kills and 14 blocks. Gabby Nemeth led Cardinal with 16 kills and Ronee Collins and Lindsay Hissa contributed with 15 and 10 kills, respectively. Haley Domen posted team-highs with 27 digs and 26 assists.

“As a team, we played well,” Chambers said. “We had pretty even stats across the board.”

The loss was the first for the Huskies this season as they dropped to 8-1 overall and 3-1 in league play.

Hornets hold on for five-set win at Cardinal