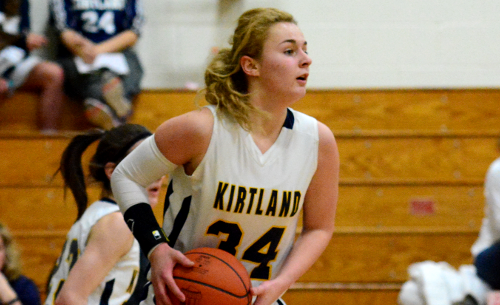 Kirtland moves into tie for first place with win over Harvey

A 56-48 loss to Harvey in the third game of the season left Kirtland in unfamiliar territory. The Hornets, winners of back-to-back league titles, were the hunters rather than the hunted.

On Wednesday, the Hornets changed all that with a 47-39 win over the Red Raiders that left the two teams tied for first place in the Chagrin Valley Conference Valley Division.

“We had to sit on that loss for about 56 days,” said Kirtland head coach Bob Bell. “It didn’t sit well with us. We worked real hard to try to get that one back and the kids bought into everything that we asked them to do and they managed to come out with the win. I couldn’t be more proud of them.”

Kirtland, which improved to 11-7 overall and 6-1 in league play, had the challenge of playing on the road against a vastly improved Harvey program. The Red Raiders had a size advantage and matched the Hornets in talent.

The Hornets pulled out the win with a 15-9 fourth quarter.

“Harvey’s program has improved greatly under John Sams,” Bell said. “They’re a legitimate team. They play good defense and they have strong inside game and good guards. It was a big win for us. Our kids came out, we knew what we had to do and we just had to go out and execute.”

Samantha Achauer scored a game-high 18 points for the Hornets but the victory was earned on defense where Kerri Zalba, Taylor Somodji, Deanna Ponzani, Sydney Snyder and Claire Neibecker stood their ground against the taller Red Raiders.

“We had to shut down their bigs inside, pressure their guards and front their big girls inside when we could,” Bell said. “That was a challenge because we’re not that big ourselves. The kids did a really good job.”

Ponzani and Neibecker combined to score 15 points in the paint.

“That was huge for us,” Bell said. “That was really truly the difference in the game, from the first game to the second game. It really was. I couldn’t be more pleased with the progress that they have made inside in that position.”

Zalba and Grace Powers, as well as Snyder, made it difficult for the Red Raiders to get into their offense.

“Kerri Zalba and Grace Powers were dynamite on defense. I think between the two of them there was only one goal. Their defense was incredible,” Bell said. “Sydney always gives you a great defensive game. Her instincts on the court are very good for a freshman.”

The Hornets have just one league game to play but it’s a big one. They’ll travel to Fairport Harding on Saturday, Feb. 14.