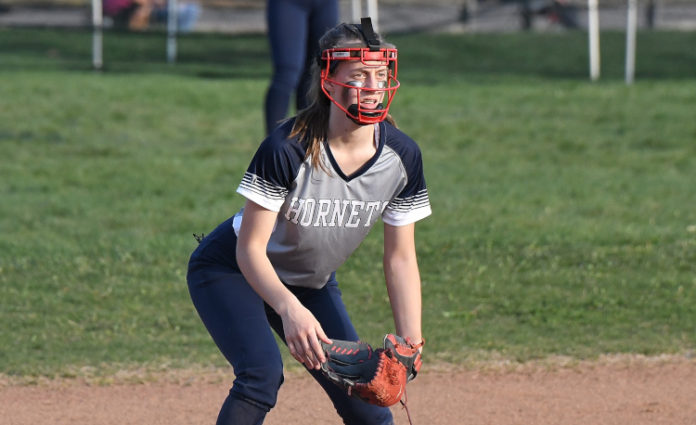 Kirtland muscles up in first win

Kirtland’s young softball team took a big step on Thursday by beating visiting Beachwood, 11-1, for its first win of the 2021 season.

The Hornets, who saw a victory slip away in the sixth inning the day before, pounded out six extra-base hits in the win.

“It was just nice to see,” said Kirtland coach Jamie Kamensky. “I feel like it’s all starting to come together and they’re starting to see that they can win. They needed to get that first win under their belts. It was exciting. Everybody was up and everybody was into it. Every single person on the team was lively. It was just good to see.”

After Gianna Cantini struck out the side in the top of the first, the Hornets wasted no time taking the lead as freshman Gianna DiFranco hit an inside-the-park home run for a 1-0 lead.

“It felt like a solid hit when I made contact,” DiFranco said. “Once I saw the ball pass the centerfielder, I knew I had the speed to get home. As soon as I rounded first, I saw Coach Eric (Cantini) waving me home.”

Cantini allowed a leadoff single and issued a walk in the top of the second but she struck out the next three batters to end the threat.

Avery Kuczkowski then drew a one-out walk and move to second on DiFranco’s single. Bella Hostutler and Madison Matijevic both were hit by a pitch to force home another Kirtland run.

The Hornets pushed six runs across the plate in the bottom of the fourth.

DiFranco reached on a fielder’s choice and stole her way to third. Hostutler walked and Matijevic hit her second home run of the season to make it 5-0. Cantini and Nikolena Samac hit back-to-back singles and scored on Chloe Ungrady’s double. Ava Puruczky closed out the scoring with a two-out RBI single.

Beachwood strung together three singles in the fifth inning to cut Kirtland’s lead to 8-1 but the Hornets responded with two in the bottom half of the inning and invoked the run rule with one in the sixth.

DiFranco started the fifth-inning rally with a single. She finished the game 3-for-4 with three runs scored and an RBI.

“As a freshman, I struggled in the first couple games this year but today really helped boost my confidence,” DiFranco said. “I saw a lot of great things from my teammates today that I think will help us compete this year.”

After stealing second, DiFranco moved to third on a groundout and scored on Cantini’s home run. Samac also tripled in the inning but was stranded at third.

Malia Becker drew a leadoff walk in the sixth and Puruczky doubled her to third and Morgan Carmosino singled to end the game.

Led by DiFranco and Samac with three hits each, Kirtland recorded a season-best 14 hits in the win.

“I hope so,” said Kamensky when asked if she believes this could be a turning point for the team’s offense. “I think the thing we have to do is keep adapting to the different pitching styles. When we saw West Geauga, we saw a faster pitcher and when we saw a slower pitcher we struggled. We finally adapted to it but I think that helps us moving forward.”

Matijevic hit her first career home run in Wednesday’s loss to West Geauga. She hit her second on Thursday and has made steady progress throughout the season.

Cantini and Puruczky both finished the game with two hits and Cantini picked up the pitching victory after allowing one earned run on five hits. She struck out 13.

West Geauga scored 26 runs off of Cantini on Wednesday, including 13 in the sixth inning that erased Kirtland’s five-run lead. She took the loss hard but quickly bounced back on Thursday.

“Gianna and I have talked and she’s really, really level-headed. She’s an old soul for her age,” Kamensky said. “She’s very understanding of her role and she knows there are going to be a lot of bumps and bruises that are going to come along with it. She knows she’s got to be the workhorse and she’s putting a lot on her shoulders. She struggled a little bit yesterday with the loss but it motivated her today to be better.”

Kirtland travels to Independence on Friday and the Hornets do so with a bit of momentum and more confidence coming off the win.

“I’m very proud of my team and it felt really good to get the first win for the season after yesterday’s loss,” DiFranco said. “The team had some great hits and Gianna pitched a great game. We really came together to get this win.”