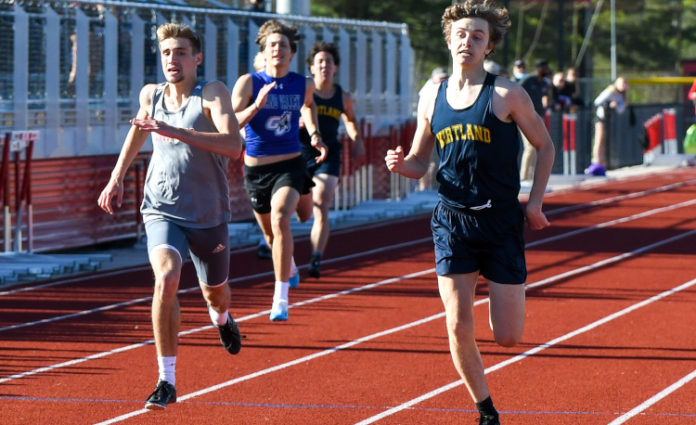 MIDDLEFIELD–Kirtland opened the postseason with a pair of event wins and several top three placements at the 2021 Chagrin Valley Conference Valley Division Track Meet at Cardinal on Thursday.

Among Kirtland’s league champions were Ryan RItossa, who won the pole vault, and Jason DeZwaan, who claimed the top spot in the 400-meter dash.

“I was very happy with my victory today, especially since I wasn’t completely sure if I won since it was such a close race,” said DeZwaan. “My opponents were not easy to beat but I’m glad I could do it.”

DeZwaan earlier this season won the same event at the Potopsky Invitational with a new personal record time of 51.59.

He beat that time on Thursday as he finished with a 51.52.

“The Potopsky Invitational showed me that the 400 was my best event and since then I’ve been training more and more and it’s paid off because I haven’t lost a 400 race so far,” he said. “I’m excited to race some more fast kids at districts to see how I will compete with them.”

Also placing among the top three for the Hornets, who finished fifth as a team, were Luke Gogolin, who was third in the long jump with a mark of 19-feet, 10 ¾-inches, and Alex Fellinger, who threw the discus 124-feet, 2-inches to finish second.

“I’m super excited to get a good time in during the postseason so then it shows that I’m still a possible contender at districts,” McGreal said. “We haven’t worked out a plan for districts yet, or even what events I’m running, but I’m just going to go in with the same mindset no matter the race and that is just staying with the front pack. That way, I’ll either walk away with a qualification to regionals or at least a PR.”

Kirtland’s girls’ team finished fourth behind strong performances from Maria Alfieiri’s and Reilly Greenlee’s top-two finishes and the effort from the 4×800 team that finished as the runner-up in the event.

Greenlee teamed up with Delaney Kuczkowski, Julie Namciu, and Sophia DeMarco to finish that race in 10:53.05.