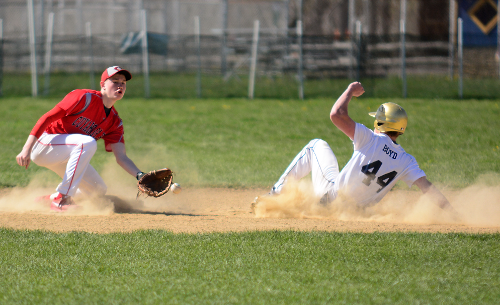 KIRTLAND—Kirtland had a baserunner thrown out in five of the Hornets’ six offensive innings but managed to pull out a 6-4 win over visiting Cuyahoga Heights on Saturday to complete the 2015 Wood Bat Classic with a perfect 2-0 mark.

The Hornets, who improved to 14-7 on the year, had a runner thrown out trying to steal second and another caught overrunning second base on a short fly ball to right field. Two runners were thrown out at the plate, one on a failed suicide squeeze and another on a steal attempt following a passed ball.

“We have a lot of speed and we steal bases all the time,” said Kirtland coach Luke Smrdel. “I don’t know if the pitchers had great moves or the catcher had a great arm but we couldn’t get those bases. We’ll clean that up and we’ll be fine.”

Kirtland jumped out to a controversial 1-0 lead in the bottom of the second inning when Matthew Finkler hit a deep fly ball to right field. Cuyahoga Heights outfielder Dalton Skerlec first appeared to catch the ball as he fell over the temporary fence. The umpire later ruled it a drop and awarded Finkler a ground rule double. After conferring with the plate umpire Finkler was awarded a home run.

Cuyahoga Heights responded with three runs on just one hit in the top of the third. The Redskins capitalized on back-to-back walks, a hit batter and two Kirtland errors. The Hornets shut down a bigger in with a 6-2-3 double play.

The Hornets got one back in the bottom half of the third when David Allchin hit a one out single, stole second and moved to third on an error. He scored on Anthony Fortuna’s sacrifice fly.

Kirtland retook the lead in the fourth when Jacob Boyd tripled and scored on Vinny Matticoli’s single. Owen Loncar drew a walk and Matticoli scored on fielder’s choice and throwing error.

The Redskins tied it at 4-4 in the top of the sixth when Tyler Selig struck out but reached first on a passed ball. R.J. Dean knocked him in.

The Hornets put it away in the bottom half of the inning when they scored two runs on three hits. Matticoli and Loncar opened the inning with back-to-back singles and Capretta reached safely on a fielder’s choice when the first baseman’s throw to third went out of play and Matticoli scored. Loncar got caught at the plate on a failed suicide squeeze but Allchin came through with a two-out single to score Capretta.

“That’s what we’ve been talking about for the last two weeks is situational hitting,” Smrdel said. “They’re finally getting the approaches right when they’re in those situations. They’re hitting the ball on the field to get runs in and we’re producing runs. We need that as we move forward. The little things are getting done. That’s a positive for sure.”

Joey Bates, Allchin, Boyd, Matticoli and Loncar all had two hits for the Hornets. Michael Kmentt struck out six and allowed one run in two innings to pick up the win for the Hornets.