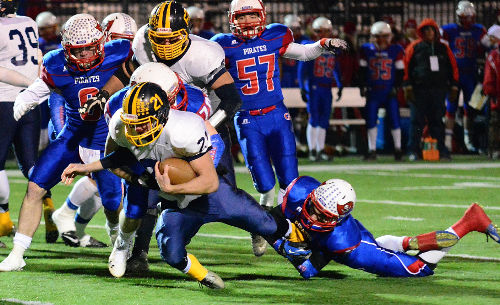 UNIONTOWN—Kirtland’s football team was firing on all cylinders in Friday’s 41-0 over previously undefeated Sugarcreek Garaway in a Division VI, Region 19 semifinal at InfoCision Field at Green Memorial Stadium on Friday.

The 12-0 Hornets forced four turnovers and completely shut down the high-flying Pirates’ offense. Garaway was outgained, 345-91, and shut out for the first time since 2007.

“It’s hard to improve on that,” said Kirtland coach Tiger LaVerde. “That was a great week of preparation for the guys. The coaching staff did a nice job all week. Hats off to my guys, the players, they executed really well.”

Garaway’s Connor Troyer returned the opening kickoff 27 yards to the Pirates’ 42 but on the second play from scrimmage Matthew Finkler forced a fumble that was recovered by Chris Sakenes. Seven plays later Sam Skiljan scored on a 1-yard run and after an off sides penalty the Hornets converted the two-point conversion attempt to lead 8-0.

Matt Grazia picked off a pass on Garaway’s second drive and Jordan Ianiro booted a 27-yard field goal to make it 11-0.

The Hornets went on to score 17 second quarter points to take a 28-0 lead into the break. Jacob Boyd ran for an 18-yard score and Adam Hess scored on a 4-yard run. Ianiro kicked a 39-yard field goal as time expired in the first half.

Skiljan ended Kirtland’s first drive of the second half with a 9-yard touchdown run that made it 35-0 and implemented a running clock. A 33-yard pass from Skiljan to Matthew Finkler later in the quarter closed out the scoring.

“Our defense was very good and I think offensively the guys up front did a tremendous job and Sam and Adam and Jacob did a tremendous game,” LaVerde said. “That was a real clean game. They had a couple kickoff returns where they popped it a little bit.”

Garaway quarterback R.J. Jacobs, who entered the game with 3,368 yards passing and 42 touchdowns, completed just 8-of-23 passes for 74 yards. Troyer, who had 1,127 receiving yards in the regular season, caught just one pass for zero yards.

Kirtland advanced to its fifth straight regional championship game where the Hornets will play 12-0 Loudonville next Friday at a site to be announced on Sunday. Loudonville defeated Mogadore, 42-14, in the semifinals.

The Hornets ended the regular season ranked No. 1 in the AP Division VI state football poll. Loudonville was No. 2.

“This is why you do it,” LaVerde said. “If you’re a competitor this is going to be an enjoyable Friday night.”