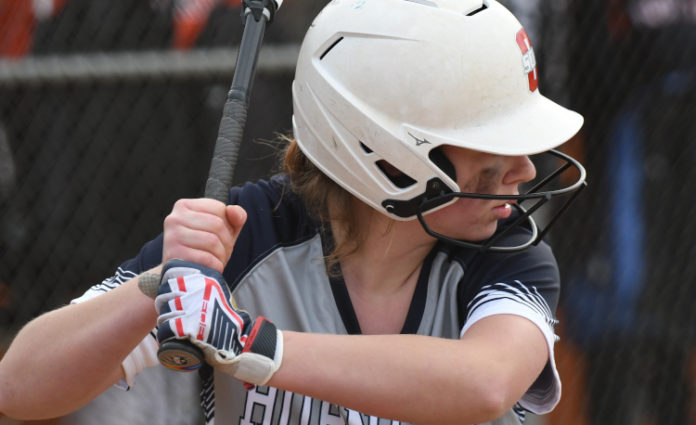 Kirtland pounded out 17 hits, including seven for extra bases, in a 13-5 upset win at No. 12 LaBrae in a Division III sectional semifinal on Tuesday.

The 18th-seeded Hornets advanced to play at No. 13 Waterloo for a sectional championship on Wednesday.

“The girls came focused today,” said Kirtland coach Jamie Kamensky. “Gianna DiFranco set the tone with a double off the fence and Bella Hostutler followed it up big. That was a big table-setter by our first two hitters. The dugout went nuts when it happened and the energy and atmosphere took off from there.”

DiFranco, the team’s leadoff hitter, finished the game 3-for-4 with two doubles and four runs scored.

“It makes me very happy that my teammates count on me to get on base,” DiFranco said. “Hitting was definitely contagious within our team with 17 hits in the game. The win today was a true team effort.”

Madison Matijevic followed the back-to-back doubles with a single and Gianna Cantini reached on an error that pushed across Kirtland’s second run. Matijevic scored on a passed ball and Ava Puruczky singled home Cantini to make it 4-0.

The Hornets tacked on four more runs in the second.

Chloe Ungrady reached on a one-out error, DiFranco doubled, and Hostutler hit a two-RBI single. Matijevic followed with a single and Cantini doubled home both runners to push the Kirtland lead to 8-0.

“We have been preaching to hit a single and pass it on to the next batter,” Kamensky said. “Singles win ball games and when we have the mentality that all extra bases are mistakes, you end up swinging more focused and controlled and things take off. That’s what happened today. The girls focused on a solid contact swing and things fell into place.”

LaBrae scored two unearned runs in the bottom of the second but the Hornets countered with two in the fourth when Matijevic singled and Cantini hit her seventh home run of the season.

“Today was very satisfying for me,” said Cantini, who finished the game 3-for-5 with three runs scored, five runs batted in, two doubles, and the home run. “I really, really love smashing softballs with a bat. Home runs fill me with joy, however, today was a team win and it was great to have Bella Hostutler back in the lineup with three big hits. She plays like a puppy wearing a jet pack. Good things happen fast.”

Kirtland finished the game with single runs in the fifth, sixth, and seventh innings and Cantini limited the Vikings to three runs down the stretch.

She allowed just one earned run on seven hits and struck out eight.

“She’s a catalyst for us,” Kamensky said of her slugger and pitcher. “Today, it was everyone though and you could just feel it. Cantini felt supported and when she’s comfortable she plays even better. The girl is a gem.”

Cantini nabbed her seventh pitching victory of the season.

Her success started with her pregame routine that helps her block out the pressure-packed situations she expected to face in the postseason.

“I prepped for this game like any other,” she said. “Falling asleep watching Netflix the night before keeps me centered; showing up two minutes late for school on game day keeps my edge sharp, and trying the mini corn dogs at lunch reminds me to stay ambitious. These are all pieces in my game day prep puzzle.”

The top of Kirtland’s lineup—DiFranco, Hostutler, Matijevic, and Cantini—each finished the game with three hits, which included six doubles and a home run, and they accounted for 12 runs and nine RBI.

“It’s fun seeing the team improve every game as a whole,” DiFranco said. “From the first game until now, coach always talks about finishing games and playing all innings. Our star center fielder, Mya (Hill) really showed that today in the field with her two huge catches to close the game.”