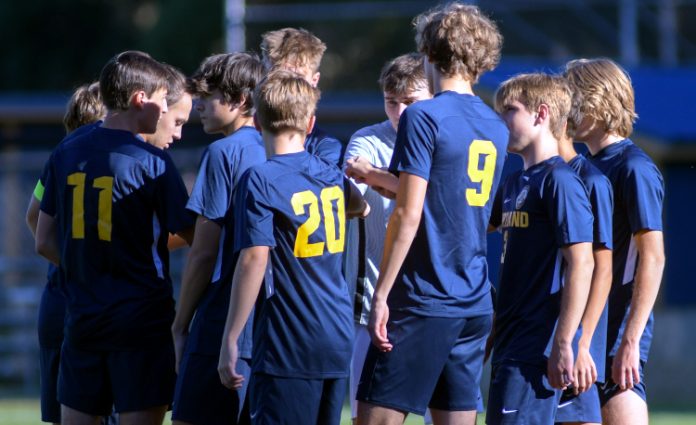 Kirtland scored four second-half goals in a 5-1 win at Independence in a battle of state-ranked teams on Thursday.

The No. 5 Hornets struggled to find their way in the first half against the 13th-ranked Blue Devils but made the necessary adjustments in the second half on the way to closing out the regular season with a 14-1-1 record. The 14 regular-season wins are the most in school history.

“(Independence coach) Ryan (MacRaild) does a good job of organizing them,” said Kirtland coach John Valentic. “They played very defensively and we had a very difficult time breaking it down and dealing with that. That was the first time we had seen anything like that but we responded well and came up with some different solutions.”

Petar Mijic-Barisic opened the scoring when he buried his fifth goal of the season into the back of the net.

“We pushed him up to the backline and Flynn had a nice punt,” MacRaild said. “Emmett put pressure on the defense and got a nice touch into space and had a nice finish around the keeper.”

Kirtland dominated the second half.

Marco Valentic scored his 26th goal of the season to put Kirtland on top, 2-1, and Jason de Zwaan, Nick Barisic, and Mijic-Barisic added goals to close out the scoring.

The Hornets scored four goals in the second half for the second straight game against quality opponents.

“It’s a good sign,” Valentic said. “Whether it’s refocusing or making adjustments, and sometimes it’s personnel with new guys coming in, but I give them credit. They don’t panic or get frustrated. They stick to our plan and eventually we wear them down.”

Anthony Svigel recorded two saves for the Hornets in the win.

Independence lost to Kirtland last year, 8-1, but hung with the Hornets for the first half. In the second, the Blue Devils fell behind and never recovered.

“We lost really bad to them last year and this game was very similar to that other than the fact that we were a little more organized and prepared,” MacRaild said. “It was 1-1 for a little bit, but they put a little more pressure on us and we lost our focus for a little bit and that was it. They put in one and then put in another. We were really tired. We did a ton of chasing and we just don’t have the depth.”

Kirtland’s possession prohibited the Blue Devils from setting up their attack.

“We were relying on the counterattack too much,” MacRaild said. “We didn’t have any control of the ball. We were just too busy trying to protect. We’re just not as solid across the field as a team like that. They were very aggressive, as far as stepping to the ball quicker, and they move around the field without the ball really well. We played a lot of chasing.”

Kirtland closes out the regular season at North on Saturday while the Blue Devils do the same at Padua.

“Hopefully, we can squeak out a win there. They’ll be big and physical but we’re hoping to right the ship on Saturday and head into the playoffs with a win,” MacRaild said. “I’m not disappointed with 11-3-1. We just lost to No. 5 in the state, who possibly could be higher, that’s okay as long as we learn from it and we don’t take a step backward. We just have to take what we learned today and apply it to the future. We have some games ahead of us, so let’s go.”

Blue Devils bounce back with win over Trinity