OhioVarsity.comThe best play here!
More
HomeKirtland pulls away from Cardinal in second half 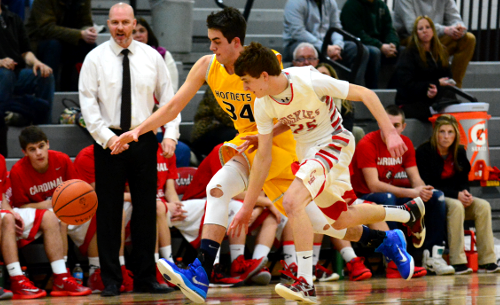 Kirtland pulls away from Cardinal in second half

MIDDLEFIELD—A fourth quarter rally helped Kirtland pull out a 67-48 win at Cardinal on Tuesday. The win, coupled with Berkshire’s 52-48 loss to Wickliffe on Tuesday, kept the Hornets alone in first place of the Chagrin Valley Conference Valley Division.

The top spot in the league standings isn’t what Nick Gallo and his Hornets are focused on.

“We’re not worried about anybody else,” Gallo said. “We’re worried about ourselves and playing one game at a time. We’ve got eight games, seven games now, and how many can we win of the last eight. We’re starting out 0-0. Can we get to 16-6? The next game is Fairport and we’re looking forward to that. We haven’t been at home it seems like for years. It’s going to be nice to be at home and play in front of our home crowd and hopefully get another conference win.”

The Hornets, who improved to 9-6 overall and 5-4 in league play, got off to a slow start against the Huskies.

Cardinal led for most of the first quarter before the Hornets tied it at 11-11 heading into the second. Both teams fought for control of the momentum, which eventually shifted Kirtland’s way late in the second quarter.

“We just have not gotten off to good starts,” Gallo said. “I think the energy level needs to be a little bit better and we need to prepare a little bit better coming into games. We just weren’t going to the basket. We were in attack mode in the second half. We have to play a little bit more that way coming out of the gate.”

Part of Kirtland’s problem was the effort turned in by the Huskies.

Cardinal changed its defense up to keep the Hornets from establishing a rhythm on the offensive side of the floor.

“Those guys did a good job of changing it up on us going to zone to a 1-3-1 to some 2-3 to some man,” Gallo said. “I think we were a little confused offensively and settled for some jumpers and were a little passive. In the second half we really turned it up.”

Led by Jacob Boyd, who finished with 13 points, the Hornets took control of the game in the second half.

“Jacob Boyd’s energy I thought was the difference tonight in the second half to help us pull away,” Gallo said. “He’s one of those kids that when he goes we go. When he’s playing hard guys feed off of him, his energy, his aggressiveness and his physique is so imposing to the other team. When he plays hard other guys are going to play with him.”

Boyd scored six straight points in the third quarter as the Hornets started to pull away and Cardinal couldn’t respond in the decisive fourth.

“I’ve been playing a seven guy rotation and they get tired,” said Cardinal coach Jon Cummins. “They started making little mistakes, not getting the loose balls. When your legs start getting tired your mind gets a little tired too and you don’t step in the lane when you need to. It started getting away from us and I tried to use my time outs to slow them down a little bit.”

With Kirtland firing on all cylinders late in the game the Huskies couldn’t keep up the pace.

Cardinal’s Jake Francis did match Kirtland’s Sam Skiljan with a game-high 15 points but Boyd, Evan Madden and Jeremy Davis all scored in double figures for the Hornets. Madden finished with 11 and Davis had 10.

Andrew Miller pitched in with 12 points for the Huskies.