Kirtland pulls away from Lakeside 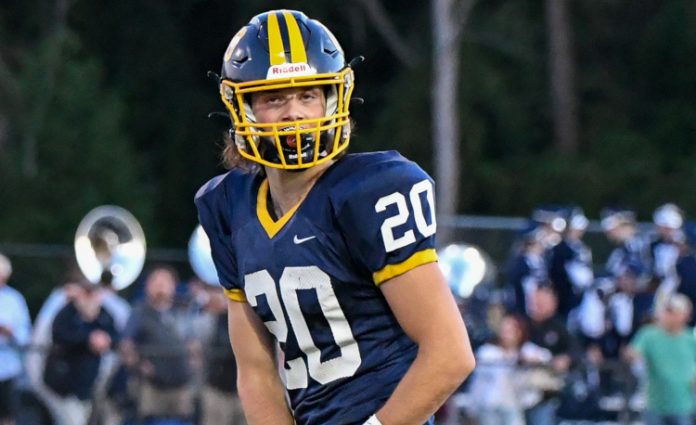 After Kirtland rolled up 28 first-quarter points against the visiting Dragons on Friday, Mother Nature intervened with a thunderstorm that sent both teams to their respective locker rooms.

Following the weather delay, the visiting Dragons made it interesting for a stretch of play during the second and third quarters, but the Hornets pulled away for a 63-28 win, their 48th straight.

“Honestly, when we were on the weather break, it wasn’t really that hard to get focused again because I was trying my best to stay focused the whole time while sitting in the speed room,” said Kirtland senior Gage Sullivan, who scored three touchdowns in the win.

Kirtland scored early and often in the first half.

Ramon Lescano opened the scoring with a 47-yard touchdown pass to Phillip LaVerde just one minute into the game. Lescano then ran for a 16-yard score three minutes later and Mason Rush broke an 80-yard touchdown run to push the Kirtland lead to 21-0 with 5:49 remaining in the opening quarter.

A thunderstorm rolled through Kirtland midway through the second quarter, forcing both teams into their respective locker rooms.

When play resumed, the Dragons scored on a 45-yard touchdown pass from Garrette Siebeneck to Malachi Matlock with 7:20 left in the half.

It took Kirtland six minutes to respond but Lescano’s one-yard touchdown run gave the Hornets a 35-7 advantage at the break.

Siebeneck’s second touchdown pass of the game, this one a six-yarder to Matlock, pulled Lakeside to within 35-14 with 7:35 left in the third.

Lescano, who finished the night 7-of-11 passing for 211 yards and four touchdowns, connected with Sullivan a 49-yard touchdown pass to push the Kirtland lead to 42-14.

Lakeside’s Alex Raffa kept the Dragons in the game with his 56-yard touchdown run midway through the third but the Hornets closed out the quarter with two touchdowns, one on a Rus 15-yard run and the other was a 26-yard pass from Lescano to Sullivan.

Any hopes the Dragons had of keeping the game close ended with Sullivan’s pick-six with 11:35 remaining in the game.

“Throughout the game, their play-action boots were working for them a little bit and when I saw that the receiver was lined up inside the hash I knew something was coming like a corner route or some sort of out route,” Sullivan said. “I was playing about three yards off and about a yard or two outside of them because I knew the out route was coming, so when the balls in the air I had a really nice T-step and picked it off and took it to the house.”

J’Shon Sanders added a three-yard touchdown run for the Dragons with 55 seconds remaining in the game.

“They had our film from the Perry game and they saw that we only pass the ball a couple times and only like two or three times to me, and only one of them was completed,” Sullivan said of the uncharacteristic passing stats. “We came back from a long weather break and since the grass was wet, it made them indubitably about our pass game and the safety and corner were overplaying on the play-action.”

Rus ran for a game-high 163 yards on just 16 carries and scored twice. Tommy Gogolin carried four times for 52 yards and Lescano added 20 yards on the ground. Sullivan caught four passes for 96 yards with the two scores and Boyd hauled in two passes for 68 yards. Sullivan and Gogolin both picked off passes.

With the win, the Hornets improved to 7-0 overall and 5-0 in the Chagrin Valley Conference Chagrin Division. The Hornets can clinch a share of the league title with a win over Edgewood next week.