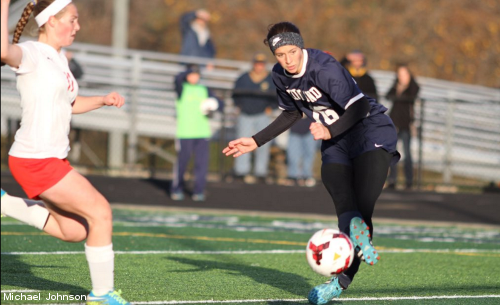 TWINSBURG–Katie Straus’ goal in the 58th minute of Saturday’s Division III regional championship game was all the Hornets needed to advance to the state Final Four. Her second goal—with seven seconds left in the game—put an exclamation point on the school’s first regional championship.

Kirtland (17-3-2) advanced to the state semifinals for the first time in school history with a 2-0 win over Creston Norwayne.

“I was really motivated,” said Straus, one of 10 Kirtland seniors. “It seemed like the last game we had the opportunities but they just weren’t going in. This time we adjusted a little bit and played better I think.”

The shutout was the sixth straight for the Hornets, who haven’t allowed a goal in the postseason except in their 1-0 shootout win over Hawken. It also pushed to 16 the team’s school record for shutouts in a season.

That strategy has worked to perfection, especially in the past two games when opposing teams packed it on defense to limit Kirtland’s scoring opportunities.

With the Hornets creating a seal around their own goal, Kirtland’s midfielders and forwards dominated possession in back-to-back regional wins.

“Our main goal with all the midfielders was to just string as many passes and try to swing the ball around, that way it couldn’t’ be defended as easily,” Straus said. “We would make space and move their defense to where we wanted it instead of just going in and hitting them.”

Straus scored the only goal in Kirtland’s 1-0 overtime win over Champion in the regional semifinals and now has a team-high 15 on the year.

Despite her success in finding the net, Straus knows just how valuable her defensive teammates are to the overall game plan.

“They do a really good job of switching off and handing off the girls that are threats that are down there and hanging out,” Straus said. “The other team’s forwards, they just hand them off. It looks really good when they switch and control the ball. It looked really good today.”

Kirtland last allowed a goal in a 1-0 regular season loss to Lake Catholic on Oct. 13. The Kirtland seniors now have recorded a total of 47 shutouts in their four years with the program.

The Hornets will play Doylestown Chippewa in the state semifinals at Ravenna on Tuesday.