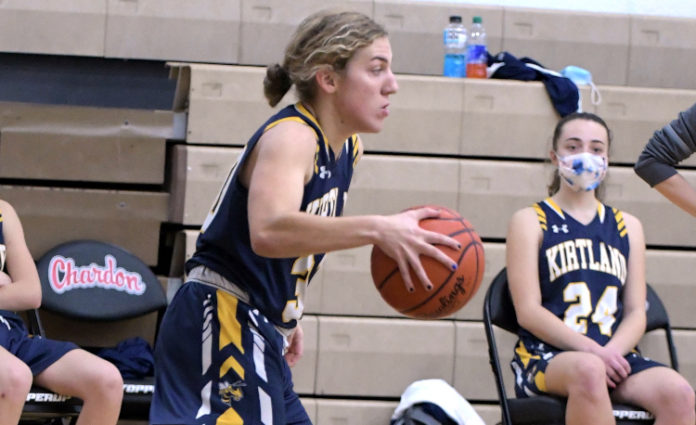 For the second straight game, Kirtland dominated the first quarter on the way to a convincing win.

The Hornets outscored host Lake Catholic in the first eight minutes of play, 10-2, on the way to a 34-20 victory.

“I think the girls wanting to win and the fire we keep talking about continues to grow,” said Kirtland coach Brittany Zele. “Our defense is what fuels our offense and that was intense in the first half. The postseason is not going to be easy so these games against quality teams, like Lake Catholic, are going to help the girls see that we can compete in districts.”

Kirtland didn’t slow down in the second quarter as the Hornets pushed their lead to 24-7 at halftime.

Despite the balanced effort, Kirtland scored just 10 points in the second half.

“Our shooting has struggled with missing easy shots and layups and I think Lake Catholic adjusted well when they came out of their zone and really pressured us to create,” Zele said. “If we can get six girls scoring 7-10 points every game, I can guarantee that no one on the team would be complaining. That’s one of the things I love about our Kirtland squad is they are not worried about individual stats. They know we have to be successful as a group in order to win.”

McIntosh excelled on both ends of the court and used her aggressive defense to disrupt the Cougars’ offensive flow, which led to some easy transition baskets.

“We love playing quick,” McIntosh said. “When we get our hands on the ball with deflections and steals we push right away. Today, it helped me with some quick layups. Corinne Greenlee and I led the trap in the second quarter and both got our hands on the ball, which turned into a six-point possession. We get inspired to play so aggressively by the energy we bring to the floor. We’re always hyped up and loud for our teammates whenever we get a good stop.”

Kirtland may have struggled on the offensive end in the second half but the Hornets never slowed down on defense.

“I would like to think it was my constant yelling and clapping that got our defense going but it comes from the girls,” Zele said. “They want to attack and are smart about it. Our defensive decision making has improved so much in just this last week. I am very proud of the adjustments and communication I’m seeing from all the girls.”

Lake Catholic outscored Kirtland in the second half, 13-10.

“We know we are a defensive team so we come into every game with that mindset,” McIntosh said. “Our run and jump press worked really well today. We knew Lake Catholic would try to clear out so it was important to jump right away. We put trust in the girls that are pressing to get their hands on the ball or slow the attack down because it leaves us in a scramble to recover and today it worked in our favor.”

Kirtland improved to 7-2 overall. The Hornets host Cardinal on Wednesday.

Brittany Zele steps down at Kirtland